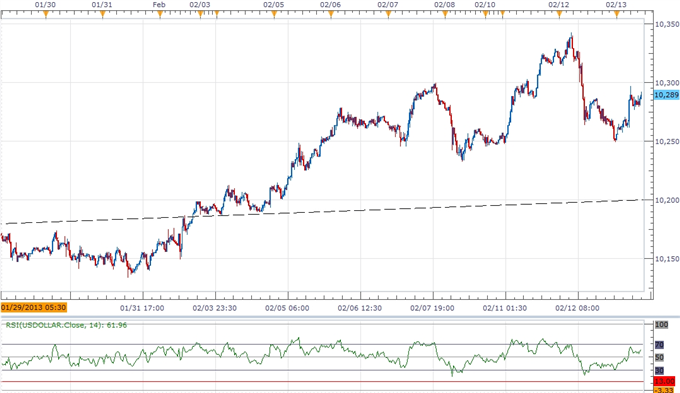 USD Propped Up By Hawkish Rhetoric, AUD Rallies Should Be Sold

The Dow Jones-FXCM U.S. Dollar Index (Ticker: USDollar) is trading marginally higher from the open after moving 101 percent of its average true range, but the greenback appears to be carving out a head-and-shoulders top on a shorter-term scale as it struggles to climb back above the 10,300 figure. As the 30-minute relative strength index falls back from overbought territory, we should see a more meaningful correction on a close below the 10,250 region, and the reserve currency may consolidate going into the end of the week as the G20 meeting comes into focus. Although we’re looking for a pullback in the index, we will maintain our bullish outlook for the dollar as we anticipate the Federal Reserve to slowly move away from its easing cycle in 2013. 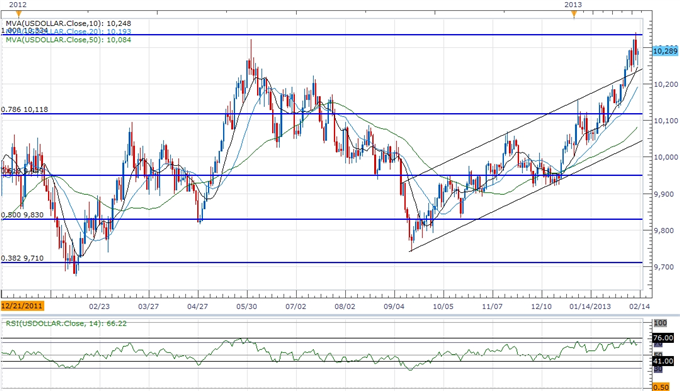 Philadelphia Fed President Charles Plosser certainly struck an improved outlook for the world’s largest economy, stating that the more broad-based recovery in the U.S. would allow the central bank to scale back its asset purchase program, but warned that the highly accommodative policy stance ‘may risk unanchoring longer-term inflation expectations’ as the rebound in private sector activity gathers pace. As a growing number of Fed officials see scope to reduce its non-standard measures over the course of the year, we should see the FOMC start to discuss a tentative exit strategy over the coming months, and the shift in central bank rhetoric should prop up the dollar over the near to medium-term as market participants weigh the outlook for monetary policy. As the relative strength index continues to fall back from resistance, we’re still looking for a near-term correction in the index, and we will look to buy dips in the greenback as the upward trend carried over from the previous year continues to take shape.

The greenback advanced against three of the four components, led by a 0.68 percent decline in the British Pound, while the Australian dollar bucked the trend and rallied 0.46 percent against its U.S. counterpart. Although we’re still bearish on the AUDUSD, the rebound from the 50.0 percent Fibonacci retracement from the 2011 high to low around 1.0230 may spark a move back towards the 61.8 percent retracement (1.0430) as the relative strength index comes off of oversold territory. However, should the economic docket show a further deterioration in consumer inflation expectations, the weakening outlook for the region may spark a selloff in the exchange rate as the Reserve Bank of Australia shows a greater willingness to cut the benchmark interest rate further. In turn, we will continue to sell rallies in the AUDUSD, and we should see further declines in the aussie as RBA Governor Glenn Stevens stands ready to encourage a stronger recovery in the $1T economy.