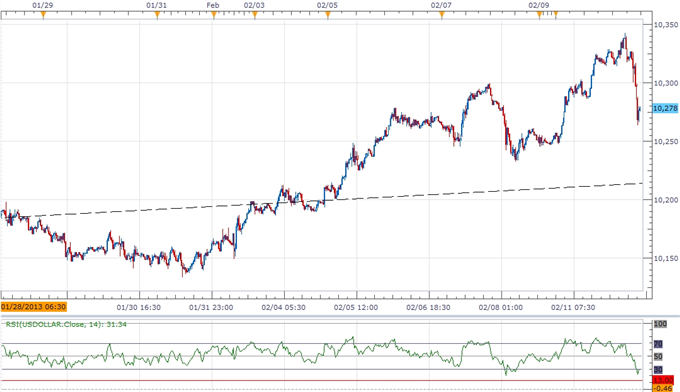 USD Poised for Larger Correction, JPY in Focus Ahead of G20

The Dow Jones-FXCM U.S. Dollar Index (Ticker: USDollar) is 0.33 percent lower from the open after moving 93 percent of its average true range, and we anticipate further declines in the greenback as it appears to have carved a near-term top. Indeed, we’re looking for a more meaningful correction in the index as the advance carried over from the previous year gets exhausted. In turn, we should see a move back towards the 10,200 figure as it remains a key pivot, but we may see a small bounce over the next 24-hours of trading as the 30-minute relative strength index rebounds from a low of 22. Nevertheless, we will maintain our bullish dollar forecast over the near to medium-term as we anticipate the Federal Reserve to conclude its easing cycle this year, and the bullish sentiment surrounding the reserve currency should gather pace going forward amid the shift in the policy outlook. 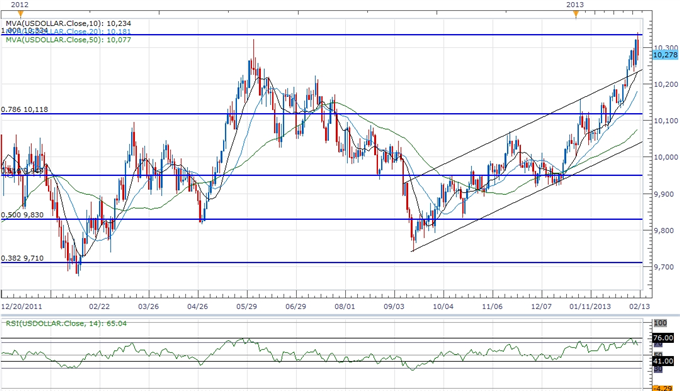 Although Fed Vice Chairman Janet Yellen floated the idea of preserving a zero interest rate policy (ZIRP) beyond the quantitative threshold for monetary policy, the board member did show a greater willingness to wind-down the non-standard measures, and we may see a growing number of central bank officials adopt a more hawkish tone this year as growth and inflation picks up. As the FOMC continues to take note of the resilience in private sector consumption along with the budding recovery in the housing market, it seems as though the committee may have undermined the strength of the U.S. consumer, and we may see the central bank start to discuss a tentative exit strategy in the coming months as the region gets on a more sustainable path. As the USDOLLAR clears the 2012 high (10,323) and marks a higher high, we should see the greenback carve out a higher low in the coming days, and we may see the 78.6 percent Fibonacci retracement come into play should the 10,200 figure fail to provide support.

Three of the four components rallied against the greenback, led by a 1.08 percent advance in the Japanese Yen, and the low-yielding currency may continue to gain ground ahead of the G20 meeting on tap for later this week as global policy makers express greater concerns surrounding the excessive moves in the JPY. The coordinated statement from the G7 sparked a sharp decline in the USDJPY, and the short-term pullback may turn into a larger reversal as the world leaders talks down the risk of a currency war. In turn, we may see the group put increased pressure on Japan’s new government to scale back its push to stem the risk for deflation, but we may see a shallow correction in the USDJPY should the relative strength index continue to find support around the 60 region.