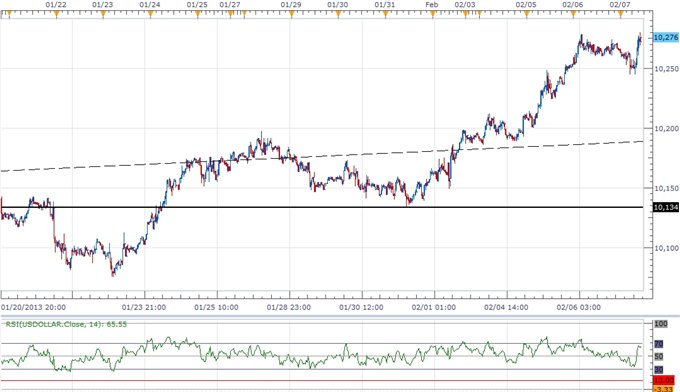 The Dow Jones-FXCM U.S. Dollar Index (Ticker: USDollar) is now trading 0.11 percent higher from the open after moving 80 percent of its average true range, and the bullish sentiment surrounding the dollar may continue to produce a shallow correction in the index as we see a growing number of Fed officials strike an improved outlook for the world’s largest economy. As the 30-minute relative strength index comes up against overbought territory, we may see another small pullback in the index, but the fundamental developments coming out of the U.S. may continue to prop up the greenback as the central bank anticipates a more broad-based recovery this year. In turn, we will continue to look for short-term pullbacks to buy into the USDOLLAR, and the reserve currency may trader higher in the week ahead as we anticipate a slew of hawkish comments from Fed policy makers. 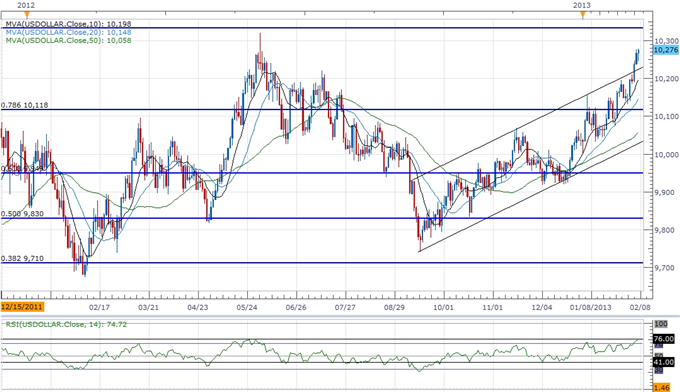 Central bank dove Charles Evans, who serves on the FOMC this year, said the committee may be able to ‘turn off’ its easing cycle prior to achieving a 7 percent unemployment as discouraged workers return to the labor force, and the ongoing recovery in the labor market may prompt the FOMC to switch gears later this year as the outlook for growth and inflation picks up. As we have board members Esther George and James Bullard scheduled to speak next week, we should hear more central bank rhetoric talking down the scope for additional monetary support, and we are still looking for a run at the 2012 high (10,323) amid the shift in the policy outlook. However, we may see a failed attempt at the key figure as the relative strength index approaches resistance (76), and we may see a corrective move back towards the 78.6 percent Fibonacci retracement around 10,118 as the rally remains overbought.

Although the greenback lost ground against three of the four components, the Euro tumbled 0.96 percent following the European Central Bank (ECB) interest rate decision, and the single currency may face additional headwinds over the next 24-hours of trading should the EU Summit disappoint. As the governments operating under the monetary union struggle to meet on common ground, German Chancellor Angela Merkel warned that the group may be unable to reach a budget deal as the rebalancing in public finances drags on the real economy. In turn, the pullback from 1.3709 may turn into a larger reversal, and we will be keeping a close eye on the 38.2 percent Fib from the 2009 high to the 2010 low around 1.3120 as the pair searches for support.