The Dow Jones-FXCM U.S. Dollar Index (Ticker: USDollar) advanced another 0.26 percent on Wednesday and the drop in risk sentiment may drive the greenback higher throughout the North American trade as the economic docket remains fairly light for the remainder of the day. As the 30-minute relative strength index falls back from overbought territory, the drop in the oscillator may pave the way for a small pullback in the USD, but we may continue to see a shallow correction in the dollar as a growing number of the Fed officials scale back their willingness to expand the balance sheet further. In turn, we will continue to buy dips in the greenback, and we should see the bullish sentiment surrounding the reserve currency gather pace throughout the year as the central bank turns increasingly upbeat towards the economy. 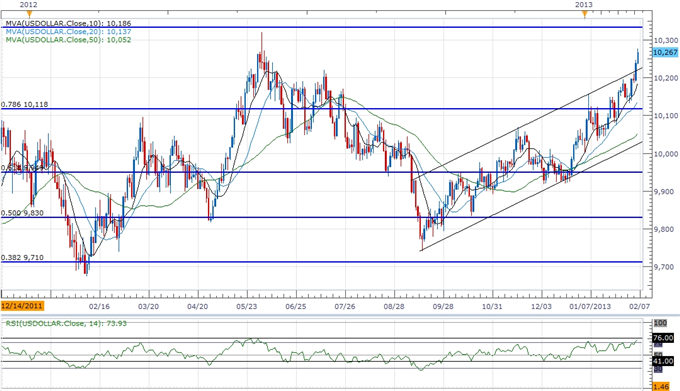 Although we’re seeing the relative strength index push into oversold territory, the oscillator may push towards the 76 region before we get a meaningful correction in the USD, but we will maintain our bullish forecast for the greenback as it preserves the bullish trend carried over from the previous year. As the fundamental developments coming out of the world’s largest economy highlights a more broad-based recovery, the FOMC looks poised to shift gears in 2013, and the central bank may conclude its easing cycle in the second-half of the year as the outlook for growth and inflation improves. In turn, we’re still looking for another run at the 2012 high (10,323), and the index may continue to march higher over the remainder of the week should the economic docket continue to show a more robust recovery in the U.S.

Three of the four components weakened against the greenback, led by a 0.77 percent in the Australian dollar, and the high-yielding currency may continue to give back the rally dating back to October should the economic docket persistently show a slowing recovery in the $1T economy. Indeed, the AUDUSD come under pressure as the 4Q Retail Sales report missed market expectations, and the exchange rate may continue to track lower over the next 24-hours of trading should we see the January employment report disappoint. As the aussie-dollar carves out a lower top around the 1.0600 figure, we are looking for a move back towards the 50.0 percent Fib from the 2011 high to low around 1.0230, but the pullback may turn into a larger reversal as the Reserve Bank of Australia (RBA) strikes a dovish tone for monetary policy.