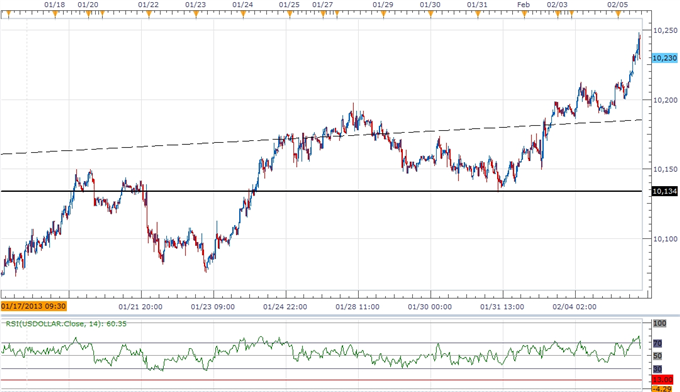 The Dow Jones-FXCM U.S. Dollar Index (Ticker: USDollar) is 0.52 percent higher from the open after moving 150 percent of its average true range, and the greenback looks poised for a pullback as the 30-minute relative strength index pushes into overbought territory. However, we may see a fairly muted correction in the dollar as the fundamental outlook for the world’s largest economy improves, and we will maintain our bullish forecast for the reserve currency amid the shift in central bank rhetoric. Although the ISM Non-Manufacturing index slipped to 55.2 from 56.1 in December, a deeper look at the report showed the employment component advance to 57.5 to mark the highest reading since 2006, while new exports orders increased for the first time since September. As a deeper look at the ISM report encourages an improved outlook for growth, we will maintain our game plan to buy dips in the USDOLLAR, and we should see the bullish sentiment surrounding the dollar gather pace throughout 2013 as a growing number of Fed officials strike an improved outlook for the region. 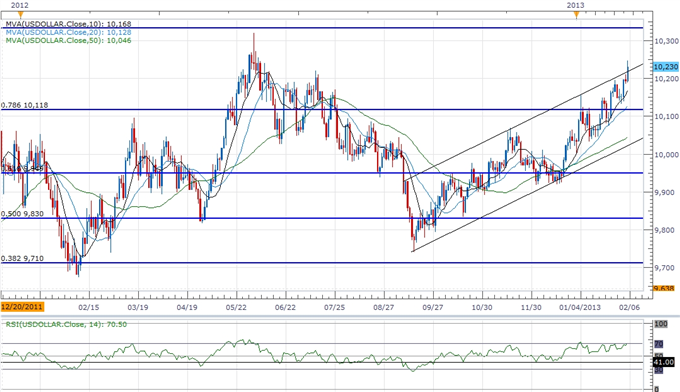 FOMC voting member Elizabeth Duke said she’s ‘optimistic’ on the U.S. economy amid the resilience in private sector consumption along with the budding recovery in the housing market, and we may see the Fed slowly move away from its easing cycle later this year as the outlook for growth and inflation picks up. As the relative strength index pushes into overbought territory, the index remains poised for a correction, and we will keep a close eye on the 78.6 percent Fibonacci retracement around 10,118 as it remains a key pivot for the greenback. As the USDOLLAR continues to carve out a series of higher highs paired with higher lows, we should see the greenback preserve the upward trend from 2011, and we are still looking for a run at the 2012 high (10,323) amid the shift in the policy outlook.

The greenback advanced against three of the four components., led by a 1.03 percent decline in the Japanese Yen, and the low-yielding currency may come under increased pressure over the near to medium-term as the new government plays an increased role in managing monetary policy. Indeed, Bank of Japan (BoJ) Governor Masaaki Shirakawa announced that he will leave the helm ahead of schedule as he plans to step down on March 19, and we may see the central bank struggle to maintain its independence as Prime Minister Shinzo Abe pledges to seat a candidate who would share similar views on policy. As the relative strength index on the USDJPY remains supported by the 60 figure, we may continue to see shallow corrections in the exchange rate, and we will look to buy the dollar-yen on a pullback as long as the political shift in Japan dampens the appeal of the low-yielding currency.