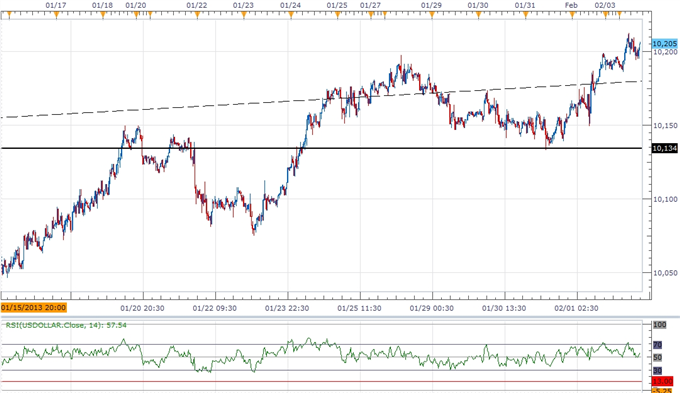 The Dow Jones-FXCM U.S. Dollar Index (Ticker: USDollar) is trading marginally higher from the open and we will maintain our bullish bias for the reserve currency as the index continues to carve out a series of higher highs paired with higher lows. As the Federal Reserve sees a more broad-based recovery in the U.S., positive developments coming out of the world’s largest economy should continue to undermine speculation for additional monetary support, and the shift in the policy outlook remains poised to carry the greenback higher as the central bank appears to be slowly moving away from its easing cycle. However, the USDOLLAR looks primed for a short-term correction as the 30-minute relative strength index falls back from overbought territory, and we may see the dollar fall back towards 10,150 as it continues to pivot around the key figure. 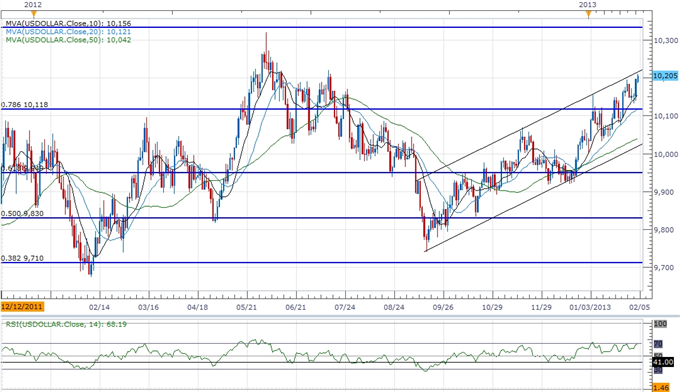 As a growing number of Fed officials drop their dovish tone for monetary policy and scale back their willingness to expand the balance sheet further, the change in central bank rhetoric suggests that the resilience in private consumption along with the budding recovery in the housing market will foster a stronger recovery in 2013, and we may see the FOMC switch gears in the coming months as the outlook for growth and inflation improves. As the USDOLLAR continues to threaten the upper bounds of the ascending channel carried over from the previous year, we’re seeing the RSI come up against overbought territory, and we may see a short-term correction going into the EU Summit on tap for later this week as European policy makers increase their effort to restore investor confidence. However, the meeting may fail to prop up market sentiment as record-high unemployment in the euro-area dampens the outlook for growth, and we may see the governments operating under the single currency call for additional monetary support as the debt crisis continues to drag on the real economy. As the dollar preserves the bullish trend from 2012, we will look for further advances in the index, and our game plan will be to buy dips in the greenback as the economic recovery in the U.S. gradually gathers pace.

Three of the four components advanced against the greenback, led by a 0.22 percent rally in the British Pound, while the Australian dollar edged 0.12 percent higher ahead of the Reserve bank of Australia (RBA) as the central bank is widely expected to keep the benchmark interest rate at 3.00%. Beyond the rate announcement, Governor Glenn Stevens may sound more dovish this time around as the resource boom in the $1T economy comes to an end, and the central bank head may see scope to lower the cash rate further in the coming months in an effort to encourage a sustainable recovery. In turn, we will be watching the policy statement for any hints of additional monetary support, and we will maintain a bearish forecast for the AUDUSD as it carves a lower top around the 1.0600 figure.