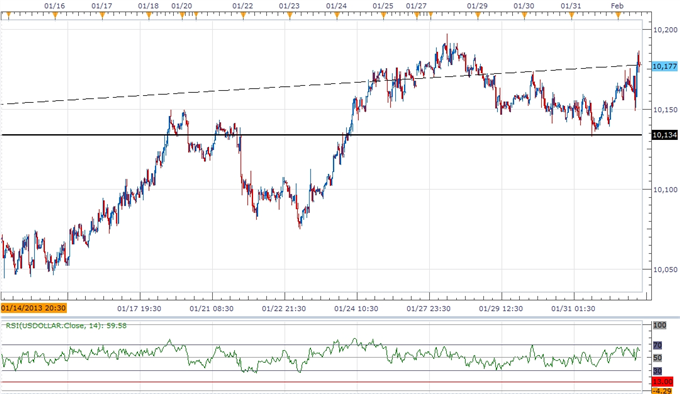 The initial reaction to the U.S. Non-Farm Payrolls report was short-lived as the Dow Jones-FXCM U.S. Dollar Index (Ticker: USDollar) is now trading 0.24 percent higher from the open, and the bullish sentiment surrounding the greenback may gather pace next week as a deeper look at the employment report raises the fundamental outlook for the world’s largest economy. As discourage workers return to the work force, the upward trend in the labor pool remains encouraging, and the more broad-based recovery in the U.S. should push the Fed away from easing cycle as it dampens the prospects of seeing a higher natural rate of unemployment. In turn, the USDOLLAR is certainly making another run at the 10,200 figure, but we will need to keep a close eye on the 30-minute relative strength index as it approaches overbought territory. 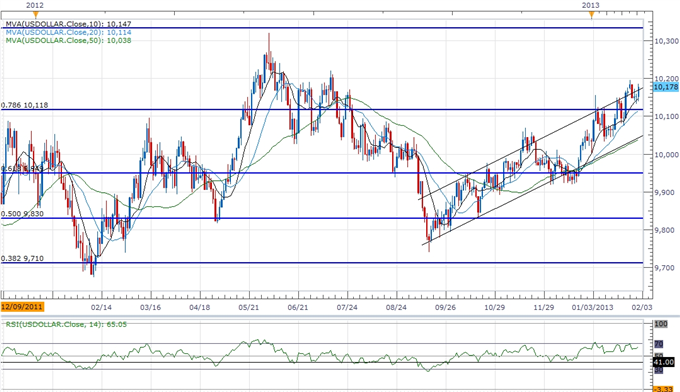 Beyond the slew of positive developments coming out of the U.S., St. Louis Fed President James Bullard, who serves on the FOMC in 2013, floated the idea that the committee may slow its asset purchases or bring quantitative easing as the recovery gradually gathers pace At the same time, Mr. Bullard saw a diminishing risk for deflation as the economy gets on a more sustainable path, and we may see a growing number of central bank officials scale back their willingness to expand the balance sheet further as it raises the long-term risk for inflation. As the Fed drops its dovish tone for monetary policy, we may see the USDOLLAR continue to threaten trendline resistance, but we will look to buy dips in the greenback as the upward trend carried over from the previous year continues to pan out. Indeed, we’re still looking for a run at 10,200 as the relative strength index tilts back to the upside, and we may see a very shallow correction in the reserve currency amid the shift in the policy outlook.

The greenback strengthen against three of the four components, led by a 0.91 percent drop in the Japanese Yen, while the Australian dollar shed 0.27 percent ahead of the Reserve Bank of Australia interest rate decision on tap for next week. According to Credit Suisse overnight index swaps, market participants are pricing a 22 percent change for a 25bp rate cut on February 4, but interest rate expectations may take a further spill should central bank Governor Glenn Stevens show a greater willingness to expand monetary policy further. As the recourse boom in the $1T economy comes to an end, we should see the RBA continue to strike a dovish tone for the region, and we will maintain our bearish forecast for the AUDUSD as the pair fails to preserve the upward trend dating back to October. As the aussie-dollar remains capped by the 1.0600 figure, we are looking for a move back towards the 50.0 percent Fibonacci retracement from the 2011 high to low around 1.0230, and the high-yielding currency remains poised to weaken further throughout the year as the region continues to cope with an uneven recovery.