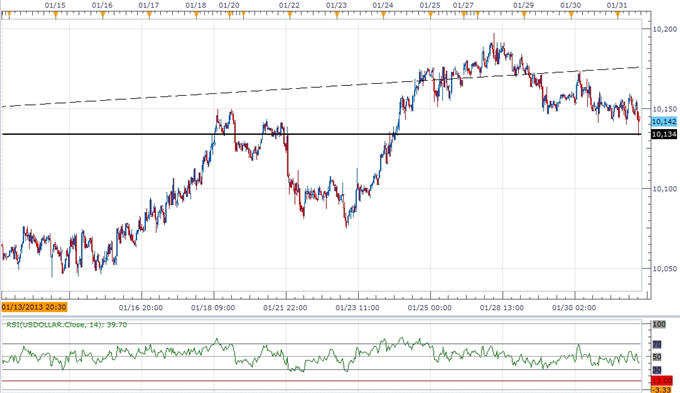 The Dow Jones-FXCM U.S. Dollar Index (Ticker: USDollar) remains 0.11 percent lower on the day after tagging a low of 10,133, and the reserve currency may continue to consolidate over the next 24-hours of trading as it struggles to hold above the 10,150 region. Despite the mixed batch of data from earlier this morning, the drop in planned job cuts along with the jump in personal incomes certainly bode well for private sector consumption, and the dollar may extend the rally from earlier this month as the U.S. Non-Farm Payrolls report is expected to show another 165K rise in employment. As the recovery in the labor market gradually gathers pace, we may see another unexpected uptick in the jobless rate as discouraged workers return to the labor force, and a slew of positive developments should increase the appeal of the dollar as a growing number of Fed officials scale back their willingness to ease monetary policy further. 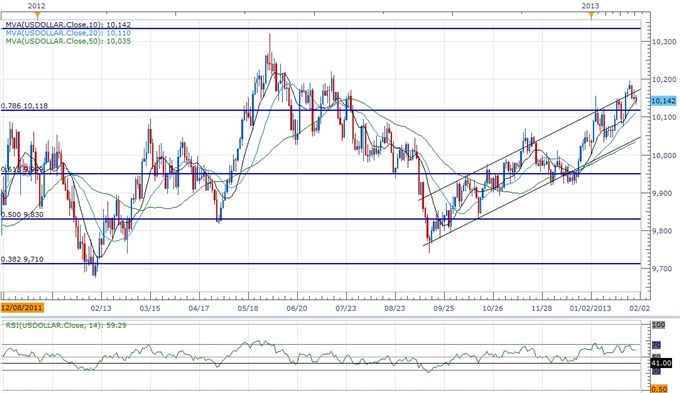 Although the FOMC maintained its highly accommodative policy stance this month, voting member Esther George dissent against the majority as the ongoing expansion in the central bank’s balance sheet heightens long-term inflation expectations, and we may see further central bank officials scale back their willingness to provide additional monetary support amid the resilience in private sector consumption along with the budding recovery in the housing market. Although the hawkish tone struck by the Fed reinforces our bullish outlook for the USDOLLAR, the index looks poised for a larger correction as it continue to threaten trendline resistance, but we may see a shallow pullback in the dollar as the central bank drops its dovish tone for monetary policy. In turn, we should see the upward trending channel continue to take shape in the month ahead, and we may see the index carve out a short-term base around former resistance - the 78.6 percent Fibonacci retracement around 10,118.

The greenback weakened against three of the four components, led by a 0.30 percent rally in the British Pound, and the short-term rebound in the GBPUSD may gather pace in the days ahead as the Bank of England (BoE) talks down expectations of adopting a nominal GDP target for monetary policy. Indeed, BoE board member Martin Weale argued that such a move would do more harm than good as the central bank sees above-target inflation over the policy horizon, and it seems as though the Monetary Policy Committee will stick to the sidelines over the foreseeable future amid the persistent slack in the real economy. As the BoE strikes a more neutral tone for monetary policy, easing bets for more quantitative easing should increase the appeal of the sterling, and we will maintain our bullish forecast for the GBPUSD as it preserves the multi-year upward trend.