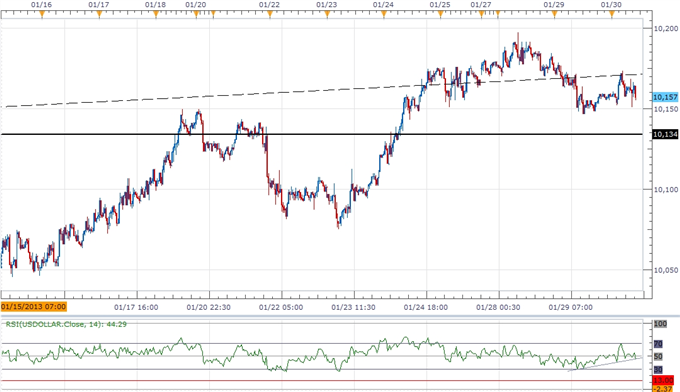 The Dow Jones-FXCM U.S. Dollar Index (Ticker: USDollar) remains 0.07 higher from the open despite the dismal 4Q GDP print, the greenback continues to pivot around the 10,150 figure, and we may see the reserve currency coil up for another run at 10,200 should we see the Federal Open Market Committee (FOMC) scale back its willingness to expand the balance sheet further. As the USDOLLAR threatens the upper bounds of the bullish channel carried over from the previous year, market participants are certainly looking for a near-term correction in the index, but the dollar may continue to gain ground ahead of the highly anticipate Non-Farm Payrolls report due out on Friday as the 30-minute relative strength index carves out an upward trend. As the world’s largest economy is expected to add another 161K jobs in January, the ongoing recovery in the labor market should increase the appeal of the USD, and the bullish sentiment surrounding the dollar may gather pace over the course of the year as the economic recovery becomes more broad-based. 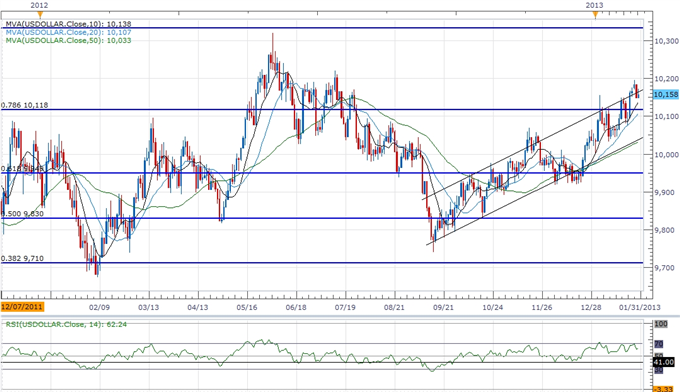 Although the FOMC is widely expected to maintain its highly accommodative policy stance in January, we should see the committee continue to highlight the resilience in private sector consumption along with the budding recovery in the housing market, and the Fed may see scope to conclude its easing cycle in 2013 as the region gets on a more sustainable path. In turn, we may see a growing number of central bank officials start to lay out a tentative exit strategy over the coming months, and the FOMC may switch gears later this year as the strength of the U.S. consumer raises the prospects for future growth. Although the technical outlook points to a short-term correction, we may see the USDOLLAR make a fresh high before moving lower, and the reserve currency may continue to retrace the decline from the previous year amid the shift in the policy outlook.

Two of the four components weakened against the greenback, led by a 0.63 percent decline in the Australian dollar, while the Japanese Yen shed 0.41 percent as Prime Minister Shinzo Abe continues to threaten the Bank of Japan’s (BoJ) independence. Indeed, Mr. Abe continued to float the idea of changing the central bank’s mandate in order to quickly achieve the 2 percent target for inflation, and the BoJ may come under increased pressure over the near-term as the new government looks to target the local currency. However, we’ve seen Governor Masaaki Shirakawa refrain from adopting an unlimited asset purchase program in order to preserve the central bank’s credibility, but the BoJ may struggle to preserve its independence as Mr. Shirakawa is set to leave the helm later this year. Although the sharp rally in the USDJPY remains overbought, we’re expecting a fairly muted correction in the exchange rate, and will look to buy dips in the dollar-yen as the transition in power dampens the appeal of the low-yielding currency.