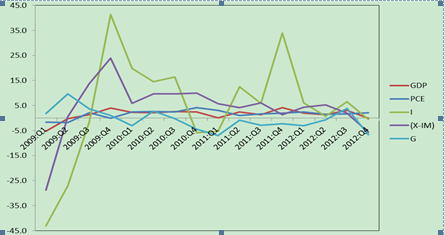 Forex Analysis: All Eyes on US Economy - Dollar Positive or Negative?

US economic event risk dominated the day as a US Q4 GDP report and Federal Open Market Committee rate decision headlined the day’s economic calendar. The world’s largest economy unexpectedly contracted by 0.1 percent in the fourth quarter, but the contraction had little impact on the Dollar Index as a deeper look at the report revealed less pessimistic implications. Personal consumption, which contributes 73 percent to US GDP, increased 2.2 percent and beat the consensus estimate of a 2.1 percent gain. As can be seen in the chart below, declines were in government spending, private domestic expenditures and trade balance which has often been revised at the proceeding GDP reports.

The FOMC interest rate decision, another top driver for the Dollar Index today, indicated that monetary easing policy will continue for ‘a considerable time’ as long as the inflation rate is below and unemployment rate is above Fed targets. The dovish remarks could have pushed the US Dollar lower, but the good news for the Greenback is that the likelihood of adding more asset purchases to the current amount of $85 billion per month has fallen; the labor market and home sales are improving at a moderate pace.

The early-session US ADP Employment Change report for January was overlooked by most traders, but a key surprise in said figures could be a good precursor to the Nonfarm Payroll numbers scheduled forFriday. A better-than-forecast employment change raises hopes that NFP readings might exceed expectations as well and push the Greenback to new highs. Tomorrow, forex traders may also adjust their holdings on a US Initial Jobless Claims report for the week ending January 27.

Overall, the US economy is picking up with positive signs such as the retracement of stock prices to pre-crisis levels, solid job gains and an upward trend in the housing market. At the same time, the biggest risk lies in concerns over future consumer confidence and consumption on a rise in the US payroll tax. How fast and in what way that Americans may shift their spending will be a key mover for the US economy as well as the Dollar Index.