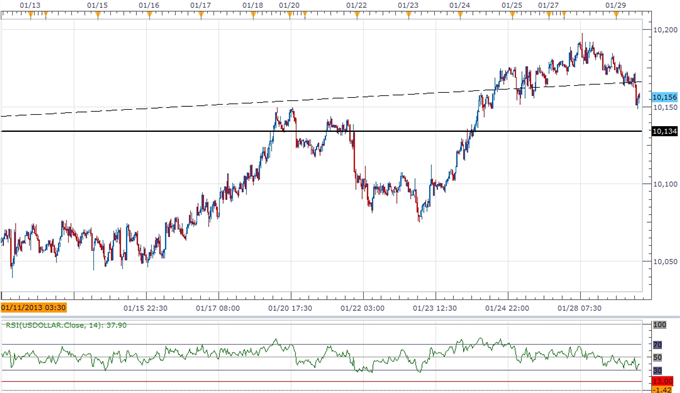 The Dow Jones-FXCM U.S. Dollar Index (Ticker: USDollar) remains 0.24 percent lower on the day after moving 81 percent of its average true range, and we may see the greenback continue to consolidate ahead of the advance 4Q GDP report as the world’s largest economy is expected to expand an annualized 1.1% during the last three-months of 2012. However, as the 30-minute relative strength index bounces back from oversold territory, the 10,150 figure looks poised to hold up ahead of the major event risks on tap for tomorrow, and we may see the dollar make another run at 10,200 should the growth report the resilience in private sector consumption produce a larger-than-expected rise in economic activity. As the USDOLLAR finally fills the gap from the Sunday open, the index may tread higher during the overnight session, but we should see market volatility thin ahead of the North American session amid the slew of major event risks on tap for Wednesday. 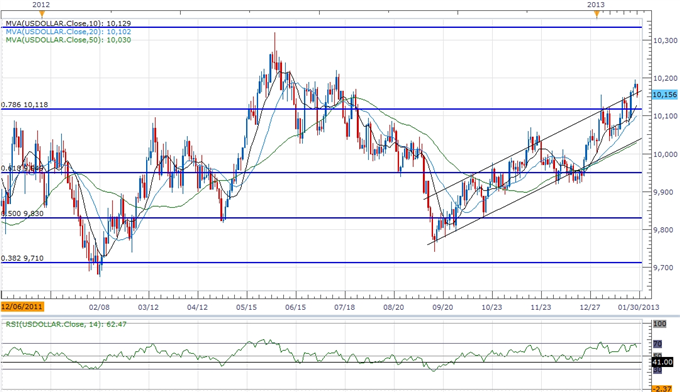 Although the GDP report is expected to move the currency market, the reaction may be short-lived as we have the FOMC interest rate decision at 19:15 GMT. Indeed, the Fed is widely expected to maintain its highly accommodative policy stance, but we may see a growing number of central bank officials scale back their willingness to expand the balance sheet further amid the more broad-based recovery in the U.S. As the committee takes note of the resilience in private sector consumption along with the budding recovery in the housing market, we anticipate a more neutral tone from the FOMC this time around, and the shift in the policy outlook should prop up the USDOLLAR as currency traders scale back bets for more quantitative easing. In turn, the dollar may trade a fresh yearly highs ahead of the highly anticipated Non-Farm Payrolls report due out on Friday, and we should see the bullish sentiment surrounding the reserve currency gather pace going forward as the fundamental outlook for the world’s largest economy improves.

The greenback weakened across the board, led by a 0.42 percent advance in the Australian dollar, which was followed by a 0.38 percent rally in the British Pound. Indeed, the short-term rebound in the GBPUSD looks poised to gather pace as the relative strength index bounces back from oversold territory, and we may see a more meaningful move to the upside as it maintains the bullish trend dating back to the 2009 lows. As we’re expecting to see another 0.2B expansion in Net Consumer Credit along with a sixth consecutive increase in U.K. Mortgage Approvals, a slew of positive developments should prop up the British Pound, and we will be looking higher for the sterling as it appears to be building a short-term base around the 38.2 percent Fibonacci retracement from the 2009 low to high around 1.5680.