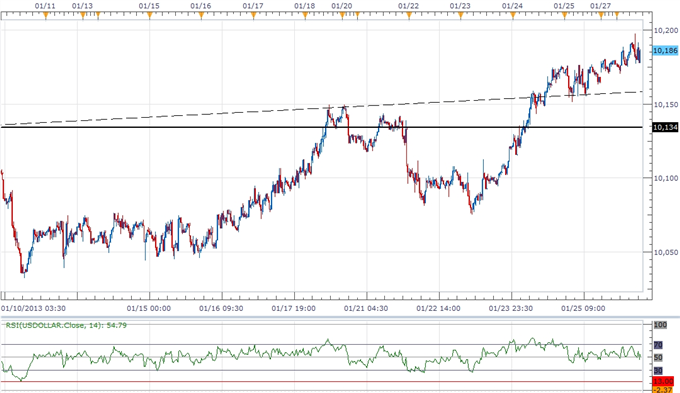 The Dow Jones-FXCM U.S. Dollar Index (Ticker: USDollar) remains 0.20 percent higher from the open after moving 64 percent of its average true range, and the bullish sentiment surrounding the greenback may gather pace over the near-term should we see a growing number of Fed officials scale back their willingness to expand the balance sheet further. Nevertheless, the dollar looks poised for a short-term correction as the 30-minute relative strength index approaches overbought territory, but we will look to buy dips in the reserve currency as the recovery in the world’s largest economy becomes more broad-based. As the rally to 10,199 tapers off, we will be keeping a close eye on the 10,150 figure, and the region may serve as interim support as the fundamental data coming out of the U.S. dampens the Fed’s scope to provide additional monetary support. 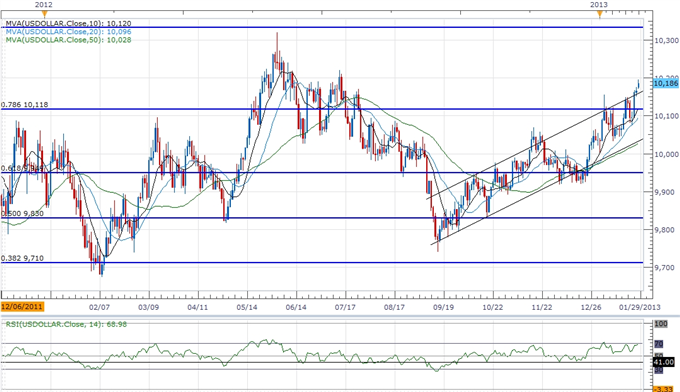 Although the headline reading for U.S. Pending Home Sales showed a 4.3 percent decline in December, the drop was largely driven by a shortfall in supply, and the resilience in private sector consumption may encourage the Fed to adopt a more hawkish tone for monetary policy as growth prospects improve. As the upward trend continues to take shape, we will maintain our bullish forecast for the USDOLLAR, but we are looking for more meaningful pullback in the index as the relative strength index comes up against overbought territory. As the greenback has yet to fill the gap from the Sunday open, we should see the dollar consolidate ahead of the major event risks on tap for later this week, but the FOMC interest rate decision could trigger a larger move towards the 2012 high (10,323) as the central bank anticipates a stronger recovery this year.

The greenback advanced against three of the four components, led by a 0.72 percent decline in the British Pound, while the Australian dollar shed 0.20 percent as investors scale back their appetite for risk. As the AUDUSD fails to preserve the upward trend from back in October, the lack of momentum to clear the 1.0600 figure reinforces our bearish forecast for the aussie-dollar, and the higher-yielding currency remains poised for further declines as interest rate expectations remain tilted to the downside. According to Credit Suisse overnight index swaps, market participants now see at least 50bp worth of rate cuts over the next 12-months, and we are looking for a move back towards the October lows as it carves out a lower top ahead of the Reserve Bank of Australia interest rate decision scheduled for February 4.