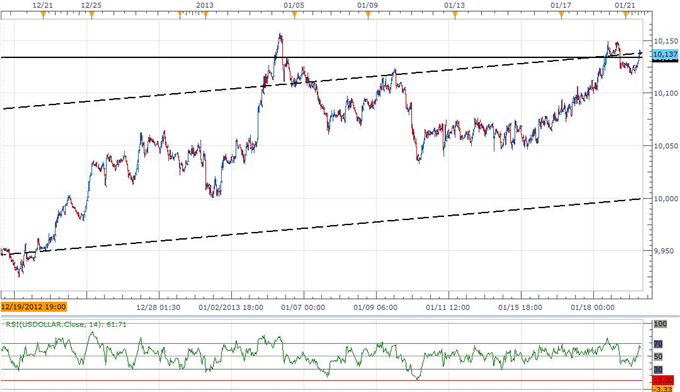 Forex: USD Outlook Propped Up By Less-Dovish Fed, All Eyes on BoJ

The Dow Jones-FXCM U.S. Dollar Index (Ticker: USDollar) appears to be firming up during the North American session as it now trades 0.03 percent lower from the open, but the rebound from the daily low (10,117) may be short-lived as the greenback approaches trendline resistance. At the same time, with the 30-minute relative strength index quickly approaching overbought territory, the index looks poised for a more meaningful correction to the downside, and we the 10,050 region come back into play as it holds up as interim support. Nevertheless, we will preserve our bullish bias for the dollar as it maintains the upward trend carried over from the previous year, and we may see the reserve currency gain ground going into the FOMC interest rate decision on January 30 as the central bank drops its dovish tone for monetary policy. 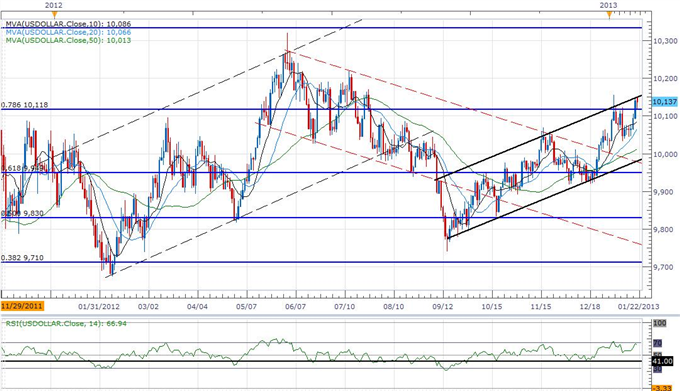 Indeed, Dallas Fed President Richard Fisher held an improved outlook for the world’s largest economy as he sees ‘GDP growth of 3 percent this year,’ while St. Louis Fed President Jeffrey Lacker argued that the central bank should ‘stop printing money as soon as possible’ as it raises the longer-term outlook for inflation. Mr. Lacker warned that the Fed may fall behind on its price stability mandate as the risks to quantitative easing outweighs the benefits, and we may see a growing number of central bank officials scale back their willingness to expand the balance sheet further as the economic recovery gradually gathers pace. With the index falling back from the upper bounds of the ascending channel, the pullback in the relative strength index foreshadows a more meaningful correction in the days ahead, and we will look for further advances in the USD amid the shift in the policy outlook.

Two of the four components advanced against the greenback, led by a 0.36 percent rally in the Japanese Yen, and the low-yielding currency may continue to gain ground over the coming days should the Bank of Japan (BoJ) take a greater stance in preserving its independence. Although there’s speculation that the BoJ will raise its price growth target following the two-day meeting, the central bank may adopt a target band for inflation rather than a specific figure, and we may see Governor Masaaki Shirakawa continue to speak out against an unlimited asset-purchasing program as the government tries to have a greater influence over monetary policy. In turn, we may see the USDJPY carve out a near-term top around the 90.00 figure, and we may finally see a correction pan out in the days ahead should the BoJ interest rate decision fall short of market expectations.