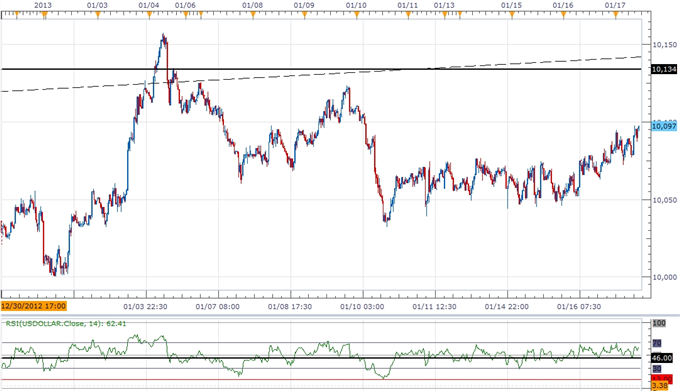 The Dow Jones-FXCM U.S. Dollar Index (Ticker: USDollar) is 0.25 percent higher on the day after moving 62 percent of its average true range, and the greenback looks poised to work its way back above the 10,100 figure as the 30-minute relative strength index finds interim support around the 46 region. As the USDOLLAR carves a short-term around 10,050, we may see another run at 10,150, and the bullish sentiment surrounding the reserve currency may gather pace as the more broad-based recovery in the world’s largest economy dampens speculation for additional monetary support. As the 12.1% jump in U.S. housing starts raises the outlook for growth, the ongoing pickup in private sector activity should keep the Fed on the sidelines in 2013, and we may see the dollar outperform this year as the fundamental outlook for the U.S. improves. 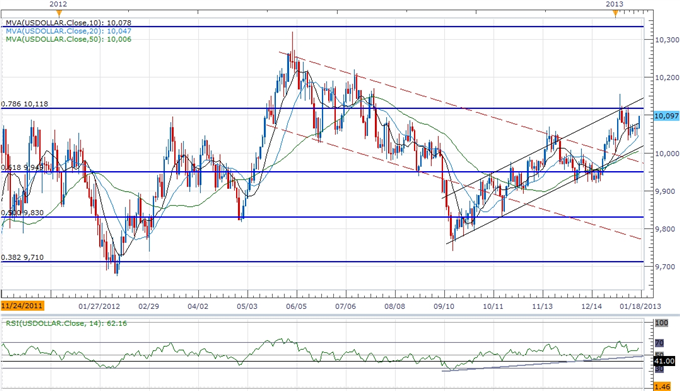 As the Fed’s Beige Book highlights a more broad-based recovery in the U.S., the upbeat tone struck by the central bank survey suggests that the FOMC will maintain its current policy in 2013, and we may see a growing number of Fed officials adopt a more hawkish tone for monetary policy as growth and inflation picks up. As the upward trending channel in the USDOLLAR continues to take shape, the higher low around 10,050 should pave the way for a higher high, and we will look for move back above the 78.6 percent Fibonacci retracement around 10,118 as market participants scale back bets for more quantitative easing. At the same time, the upward trend in the relative strength index reinforces our bullish outlook for the dollar, and we may see the greenback continue to appreciate ahead of the FOMC interest rate decision on January 30 as the central bank appears to be slowly moving away from its easing cycle.

Three of the four components weakened against the greenback, led by a 1.24 percent decline in the Japanese Yen, and the low-yielding currency may face additional headwinds ahead of the next Bank of Japan (BoJ) rate decision on January 22 as market participants see the central bank adopting a 2% target for inflation. However, we may see Governor Masaaki Shirakawa continue to speak out against an unlimited asset purchase program in order to preserve the central bank’s independence, and the BoJ may ultimately implement a target range between 1-2 percent for price growth in an effort to stem the risk for deflation. In turn, a deviation from the government’s appeal may increase the appeal of the Japanese Yen, and the pullback from 89.65 may turn into a more meaningful correction should the BoJ make a greater push to preserve its credibility and independence.