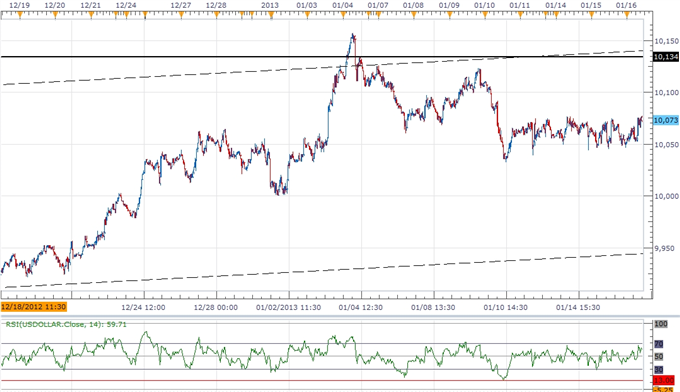 Although the Dow Jones-FXCM U.S. Dollar Index (Ticker: USDollar) remains 0.09 percent higher from the open, we’re seeing the greenback preserve the sideways price action carried over from the previous week, and the dollar may continue to consolidate going into the Fed’s Beige Book as the 30-minute relative strength index approaches overbought territory. However, as the USDOLLAR continues to pivot around the 10,050 figure, the greenback appears to be building a short-term base ahead of the next FOMC interest rate decision on January 30, and the bullish sentiment surrounding the dollar may gather pace in the days ahead as a growing number of central bank officials scale back their willingness to expand the balance sheet further. In turn, a more upbeat Beige Book could pave the way for another run at the 10,150 region, and the dollar may continue to carve higher highs along with higher lows amid the shift in the policy outlook. 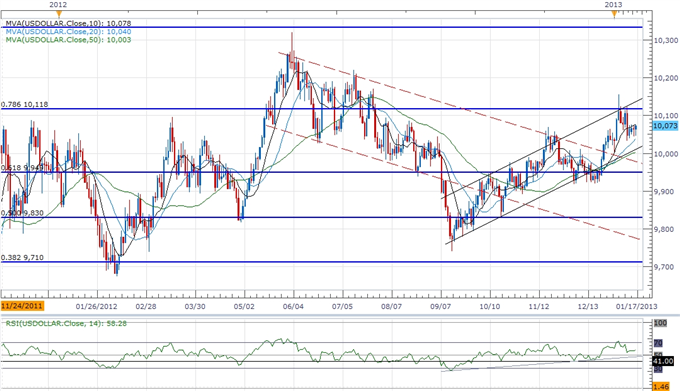 Despite the more broad-based recovery in the world’s largest economy, Boston Fed President Eric Rosengren, who votes on the FOMC this year, and Minneapolis Fed President Narayana Kocherlakota argued that the central bank should do more to target the ongoing weakness in the labor market, but pledged to assess the cost and benefits of the open-ended asset purchase program as it raises the long-term outlook for inflation. Nevertheless, we should see the Fed continue to highlight the resilience in private sector consumption along with the budding recovery in the housing market as it raises the outlook for growth, and the FOMC may change its tune over the course of the year as the rebound in economic activity raises the threat for inflation. Although we’re seeing the relative strength index continue to fall back from overbought territory, we will maintain our bullish forecast for the USD as the oscillator preserves the upward trend from back in September.

The greenback strengthened against three of the four components, led by a 0.47 percent decline in the British Pound, while the Australian dollar continues to hold below the 1.0600 figure as the AUDUSD slipped 0.15 percent from the open. Although we’re expecting to see Australian employment increase another 4.5K in December, consumer inflation expectations are currently at its lowest level since 1997, and a further deterioration in the price growth outlook may dampen the appeal of the high-yielding currency as the Reserve Bank of Australia keeps the door open to cut the benchmark interest rate further. According to Credit Suisse overnight index swaps, market participants see borrowing costs in the $1T economy falling by nearly 50bp over the next 12-months, and the AUDUSD may have carved out a short-term top this month as Governor Glenn Stevens is expected to strike a cautious outlook at the February 4 meeting.