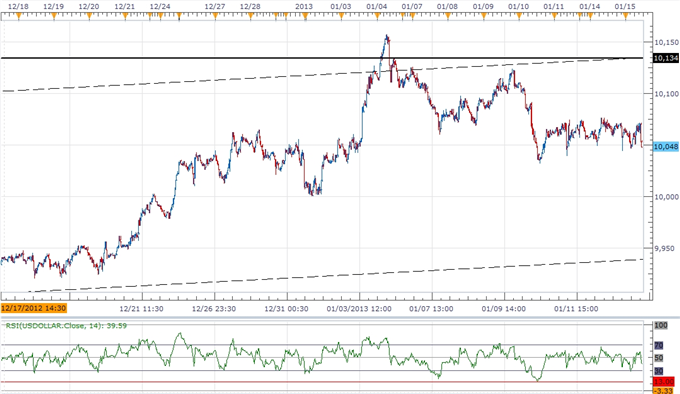 The Dow Jones-FXCM U.S. Dollar Index (Ticker: USDollar) is 0.17 percent lower on the day after moving 60 percent of its average true range, and we may see the pair track continue to track sideways over the next 24-hours of trading as it pivots around the 10,050 figure. However, as the index falls back from trendline resistance, the short-term pullback may turn into a larger correction, and we may see the greenback threaten the bullish trend carried over from the previous year should the dollar struggle to hold above the 10,000 figure. Nevertheless, the fundamental outlook may continue to prop up the reserve currency as the reliance in private sector consumption raises the scope for growth, and we may see the Federal Reserve sound more hawkish going forward as the economic recovery gradually gathers pace. 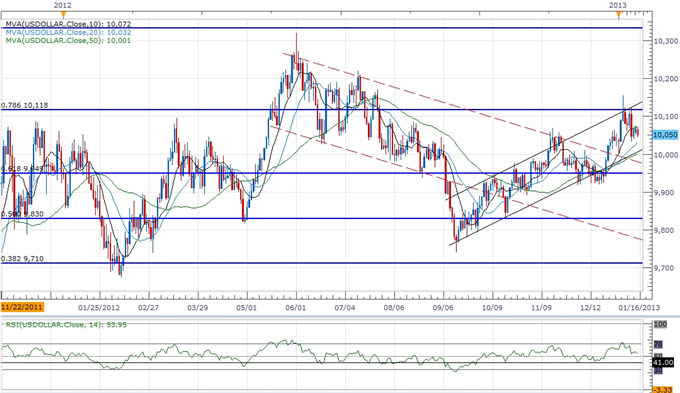 Fed Chairman Ben Bernanke is becoming ‘cautiously optimistic’ on the economy amid the budding recovery in the housing market along with the ‘modest improvement’ in the labor market, and we may see a growing number of central bank officials scale back their willingness to expand the balance sheet further as the FOMC weighs the costs and benefits of its open-ended asset purchase program. However, Minneapolis Fed President Narayana Kocherlakota struck a rather dovish tone and pushed for ‘a more accommodative policy stance’ in order to encourage a stronger recovery, and we may see a growing rift within the central bank as they now operate under a ‘qualitative guidance.’ As the USDOLLAR preserves the upward trend from the previous year, the short-term correction in the greenback may provide a buying opportunity for currency traders, and we will look for further advances in the index as it appears to be carving a higher low ahead of the next FOMC meeting on January 30.

Two of the four components rallied against the greenback, led by a 1.08 percent rally in the Japanese Yen, while the British Pound pared the overnight decline to 1.6032 to trade 0.09 higher during the North American session. Indeed, the sterling took a hit amid fears of a credit-rating downgrade for the U.K., but we may see the GBPUSD firm up ahead of the Bank of England (BoE) Minutes as the policy statement is expected to talk down speculation for additional monetary support. As the BoE sees above-target inflation over the policy horizon, we should see the Monetary Policy Committee strike a more hawkish tone this time around, and we may see a growing number of central bank officials start to discuss a tentative exit strategy over the coming months as board appears to be slowly moving away from its easing cycle. As the GBPUSD bounces off of trendline support, we may see the pair work its way back towards the 1.6300 figure, and we will maintain a bullish outlook for the Pound as long as it holds above the 1.6000 region.