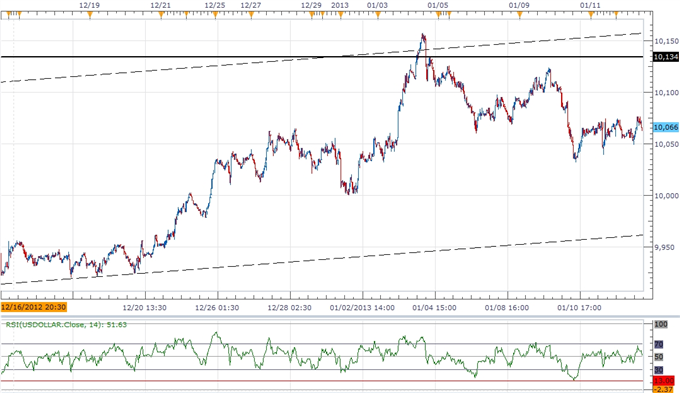 Forex: USDOLLAR Steady Ahead of Fed Rhetoric, Bernanke in Focus

The Dow Jones-FXCM U.S. Dollar Index (Ticker: USDollar) is trading 0.03 percent higher from the open after moving 59 percent of its average true range, and the drop in risk appetite may prop up the greenback over the next 24-hours of trading as it benefits from safe-haven flows. Indeed, we have a slew of Fed officials scheduled to speak later today, with Chairman Ben Bernanke on the wires at 21:00 GMT, and the fresh batch of central bank rhetoric may spur a short-term rally in the USD should the FOMC talk down speculation for additional monetary support. However, as the 30-minute relative strength index falls back from a high of 66, the pullback from trendline resistance may turn into a larger correction, and we may see the dollar struggle to hold above the 10,000 figure as the short-term rebound appears to be overbought. 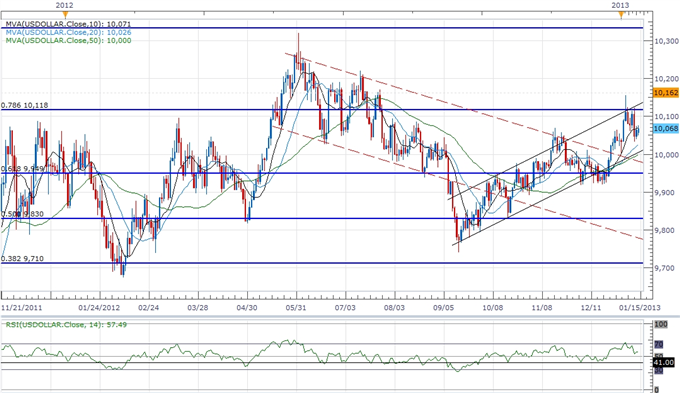 Chicago Fed President Charles Evens, who serves on the FOMC this year, endorsed a highly accommodative stance over the policy horizon amid the ongoing slack in the real economy, and went onto say that ‘clarifying conditionalities can help households and businesses better plan for the future’ as the central bank adopts a ‘qualitative approach’ for monetary policy. In turn, Mr. Evans argued that the Fed should keep rates low until 2015, but we may see the committee change its tune over the course of the year as growth and inflation gradually picks up. Indeed, we may see Fed Chairman Ben Bernanke sound more upbeat this time around amid the budding recovery in the housing market along with the resilience in private sector consumption, and the central bank see scope to bring its easing cycle to an end in 2013 as the world’s largest economy gets on a more sustainable path. The broader picture for the USDOLLAR remains bullish as it maintains the upward trend carried over from the previous year, but we will keep a close eye on the relative strength index as it works its way back towards support around the 41 figure.

The greenback advanced against two of the four components, led by a 0.39 percent decline in the British Pound, while the Japanese Yen shed 0.04 percent as Japanese Prime Minister Shinzo Abe increased his pledge to weaken the local currency. Indeed, there’s been reports that Japan’s Liberal Democratic Party is discussing a JPY 50T program to purchase foreign securities, but the new initiatives may push the Bank of Japan (BoJ) to the sidelines as the central bank tries to preserve its independence. As the government tries to have a greater influence on monetary policy, we may see central bank Governor Masaaki Shirakawacontinue to speak out against an unlimited asset-purchasing program, but we may see the BoJ ultimately adopt a 2 percent target for price growth as it struggles to stem the risk for deflation. Although the USDJPY remains heavily overbought, we are still waiting for the relative strength index to push and close below the 70 figure, but we may see shallow correction in the Japanese Yen as the government continue to target the exchange rate.