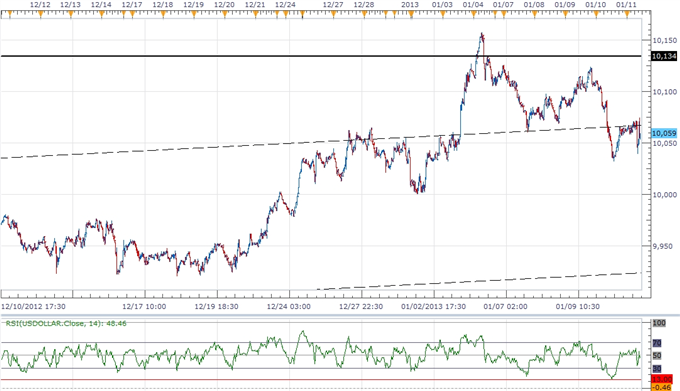 The Dow Jones-FXCM U.S. Dollar Index (Ticker: USDollar) is now 0.11 percent higher from the open after moving 76 percent of its average true range, and we may see the greenback make another run at the 10,150 figure as the FOMC scales back its willingness to expand the balance sheet further. As the 30-minute relative strength index bounces back from support (13), the recent strength in the greenback should get carried into the week ahead, and we may see another short-term rally in the dollar as a slew of Fed officials, including Chairman Ben Bernanke, are scheduled to speak next week. Even though the Fed sticks to the sidelines, the shift in central bank rhetoric is likely to influence USD price action, and we should see the bullish trend continue to take shape in the week ahead as market participants scale back bets for more quantitative easing. 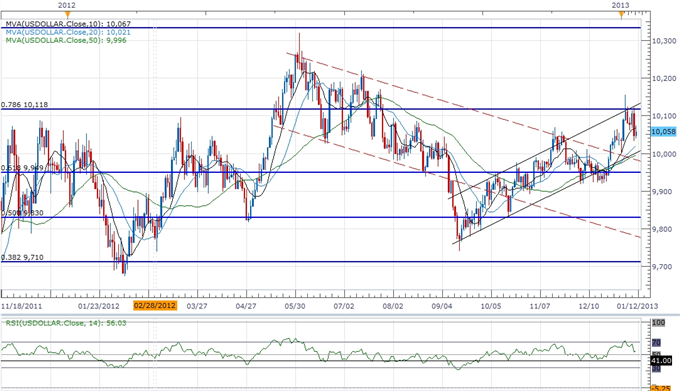 Philadelphia Fed President Charles Plosser warned ‘efforts to drive real rates more negative or promises to keep rates low for a long time may have frustrated households’ efforts to rebuild their balance sheets without stimulating aggregate demand or consumption,’ and went onto say that the central bank ‘must guard against the medium- and longer-term risks of inflation’ as economic recovery gradually gathers pace. In contrast, Minneapolis Fed Narayana Kocherlakota argued that ‘monetary policy is currently too tight’ amid the ongoing slack in the real economy, but we may see the unprecedented steps taking by the FOMC come under increased criticism as the outlook for growth and inflation improves. As the USDOLLAR continues to trade within the upward trending channel dating back to September, we will be watching the 50-Day SMA (9,996) for key support, and will maintain a bullish forecast going into the next Fed meeting on January 30 as the central bank drops its dovish tone for monetary policy.

The greenback advanced against three of the four components, led by a 0.42 percent decline in the Australian dollar, but the recent weakness in the higher-yielding currency may be short-lived as the data on tap for the following week is expected to encourage an improved outlook for the $1T economy. As Australian employment is expected to increase another 4.5K in December, with home loans expanding 0.5% in November, a slew of positive developments may increase the appeal of the aussie, but we may see the Reserve Bank of Australia (RBA) keep the door open to expand monetary policy further as it aims to encourage a stronger recovery. As the AUDUSD struggles to push back above the 1.0600, the key figure should continue to hold up as resistance, and we will look a more meaningful move to the downside as the relative strength index on the pair remains capped by the 67 region.