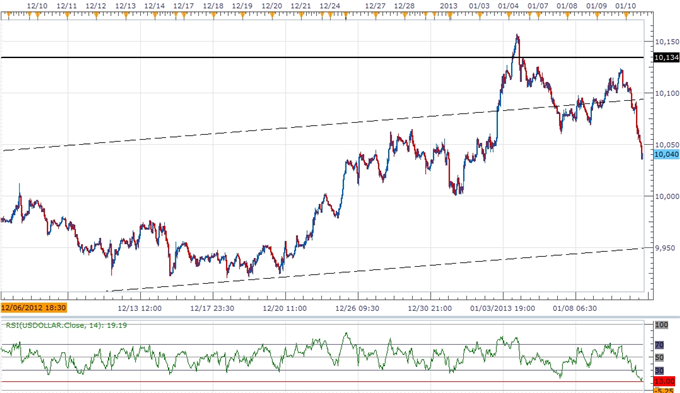 The Dow Jones-FXCM U.S. Dollar Index (Ticker: USDollar) is trading 0.64 percent lower from the open after moving a whopping 197 percent of its average true range, and the greenback may continue to give back the advance from the previous year as it falls back from interim resistance. As the index trades back within the upward trending channel carried over from the previous year, we may see the dollar work its way back towards the 9,950 in the coming days, but we should see a small rebound over the next 24-hours of trading once the 30-minute relative strength index bounces back from oversold territory. Nevertheless, we will maintain a bullish forecast over the near to medium-term as the Federal Reserve drops its dovish tone for monetary policy, and the dollar looks poised to track higher over the near to medium-term as the central bank appears to be slowly moving away from its easing cycle. 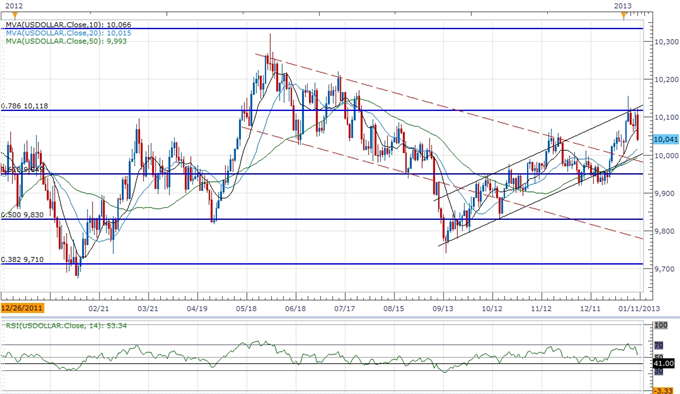 As the near-term correction takes shape, we will closely watching the 50-Day SMA (9,993) as it lines up with trendline support, and we will also be keeping an eye on the relative strength index as it approaches support around the 41 figure. Nevertheless, Kansas City Fed President Esther George, who serves on the FOMC this year, struck a rather upbeat tone for the U.S. economy as she expects the world’s largest economy to grow ‘a bit more than 2 percent’ in 2013, and went onto say that quantitative easing may complicate the Fed’s exit strategy as it raises the risk of seeing an inflationary surge. As the FOMC board member takes note of a more broad-based recovery, we may see a growing number of central bank officials scale back their willingness to expand the balance sheet further, and the committee may start to adopt a hawkish tone for monetary policy as the economy gets on a more sustainable path.

The greenback weakened against three of the four components, led by a 1.45 percent rally in the Euro, while the Japanese Yen bucked the trend as the low-yielding currency shed 0.36 percent on the day. Indeed, there’s reports that the Bank of Japan (BoJ) and the Japanese government will specify a 2 percent target for inflation as policy makers look to address the risk for deflation, but we may see central bank Governor Masaaki Shirakawa continue to speak out against an unlimited asset-purchasing program in an effort to preserve the BoJ’s independence. Although the USDJPY remains heavily overbought, we may see the exchange rate push higher until the relative strength index moves back below 70, but we may see a fairly shallow correction in the exchange rate as Prime Minister Shinzo Abe pushes the BoJ to weaken the local currency.