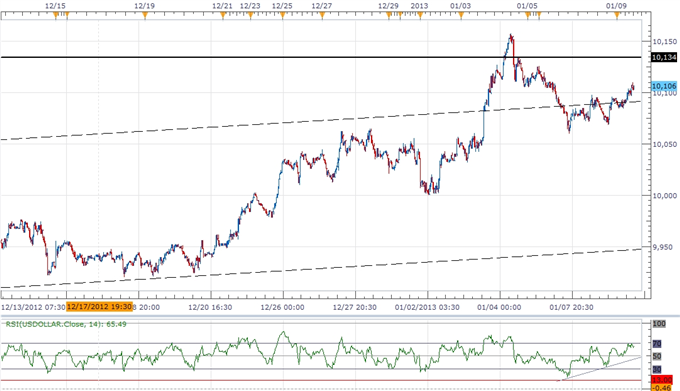 Although the Dow Jones-FXCM U.S. Dollar Index (Ticker: USDollar) remains 0.29 percent higher from the open, we will be keeping a close eye on the 30-minute relative strength index over the next 24-hours of trading as the oscillator approaches overbought territory. There’s still scope of seeing another run at the 10,150 figure as the RSI maintains the upward trend from earlier this week, but we should get a more meaningful pullback in the index once the oscillator break below trendline support. In turn, we are looking for a move back towards the 9,950 region, but the more hawkish tone struck by Fed officials may continue to prop up the reserve currency as the central bank looks to bring its easing cycle to an end. 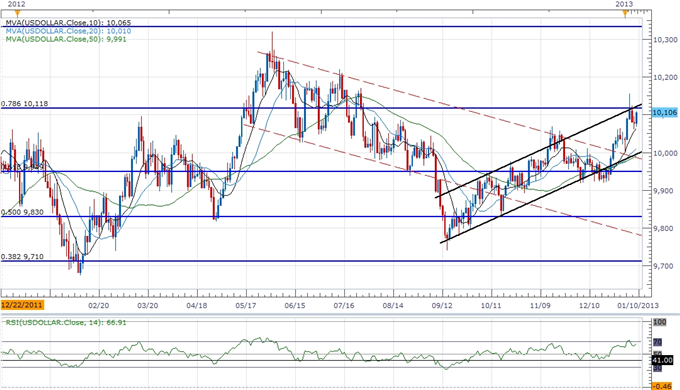 We will retain our bullish outlook for the USDOLLAR as the upward trending channel continues to take shape, but the 78.6 percent Fibonacci retracement around 10,118 may continue to serve as resistance as the relative strength index continues to approach the 70 mark. Nevertheless, Richmond Fed President Jeffrey Lacker, the lone dissenter on the FOMC, warned that ‘attempts to overstimulate real economic activity via monetary policy can instead run the risk of raising inflation,’ and went onto say that there’s a ‘material upside risks to inflation in 2014 and beyond’ as the non-standard measures present a risk to the Fed’s exit strategy. As the economic recovery gradually gathers pace, the shift in the policy outlook should continue to prop up the greenback, and we may see the bullish trend gather pace throughout the course of the year as drops its dovish tone for monetary policy.

Three of the four components weakened against the greenback, led by a 0.84 percent decline in the Japanese Yen, while the Australian dollar bucked the trend and advanced 0.19 percent amid a bound in risk sentiment. However, the AUDUSD appears to be carving a lower top In January amid the lack of momentum to push back above the 1.0600 figure, and we should see the high-yielding currency come under ahead of the following month as market participants see the Reserve Bank of Australia (RBA) taking additional steps to shore up the $1T economy. According to Credit Suisse overnight index swaps, there’s expectations of seeing the RBA lower the benchmark interest rate by nearly 50bp over the next 12-months, and we may see the AUDUSD revert back towards the 1.0200 figure ahead of the February 4 meeting as the central bank maintains a dovish tone for monetary policy.