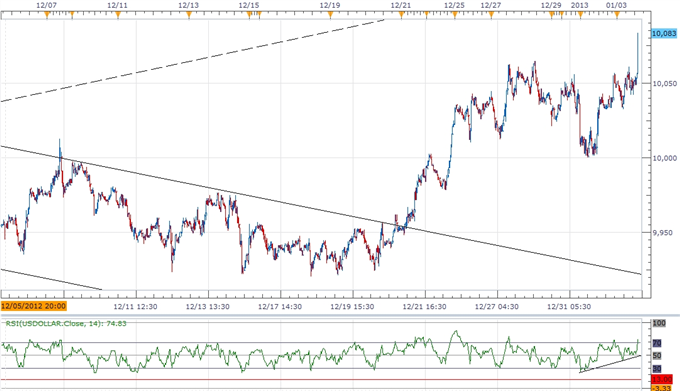 The Dow Jones-FXCM U.S. Dollar Index (Ticker: USDollar) is 0.09 percent higher from the open after moving 79 percent of its average true range, and the reserve currency may continue to push higher throughout the North American trade as market participants scale back their appetite for risk. Indeed, the bullish sentiment surrounding the dollar looks poised to gather pace this year amid the shift in the policy outlook, and we should see the Fed slowly move away from its easing cycle as the world’s largest economy gets on a more sustainable path. However, as the 30-minute relative strength index approaches overbought territory, we should see a short-term correction pan out in the days ahead, and the index may approach the 9,950 figure to test for trendline support. 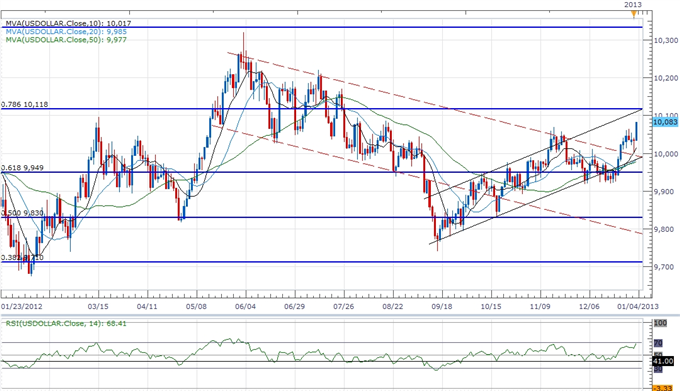 Indeed, FOMC board member Janet Yellen expressed hopes of exiting ‘the period of accommodative monetary policy’ as the central bank continues to rely on its non-standard measures, while Philadelphia Fed President Charles Plosser said the committee needs to preserve price stability amid the ballooning balance sheet. As the economic recovery gradually gathers pace, it seems as though a growing number of Fed officials are looking to switch gears in 2013, and we may see the central bank start to discuss a tentative exit strategy later this year as growth and inflation picks up. As the fundamental outlook for the U.S. improves, we should see the index maintain the upward trend carried over from the previous year, but we are looking for a near-term pullback as the relative strength index falls back from a high of 71.

The greenback advanced against three of the four components, led by a 0.47 percent decline in the British Pound, while the Japanese Yen bucked the trend as the low-yielding currency gained 0.83 percent against its U.S. counterpart. As Japan looks to implement a JPY 5.2 trillion public works project, the expansion in fiscal policy may take pressure off of the Bank of Japan (BoJ) to adopt an unlimited asset purchase program, and the pull back from 88.40 may turn into a larger correction as Governor Masaaki Shirakawa looks to preserve the central bank’s independence. As the relative strength index on the USDJPY looks poised to push back below the 70 figure, the move should provide a more meaningful downside move in the exchange rate, but we may see a shallow correction as Japanese policy makers push the BoJ to adopt a 2 percent target for inflation.