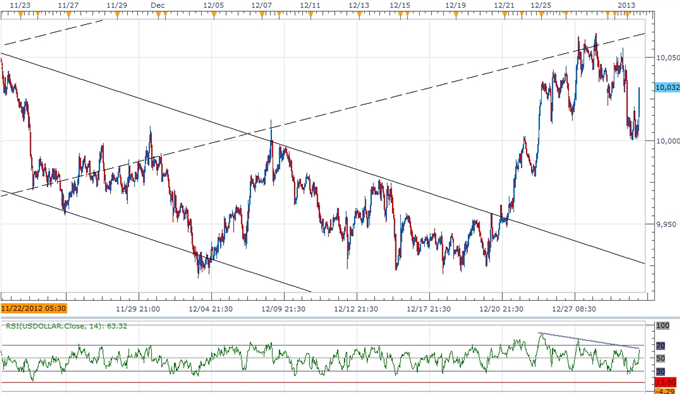 The Dow Jones-FXCM U.S. Dollar Index (Ticker: USDollar) remains 0.10 percent lower from the open after moving 142 percent of its average true range, and we may see the greenback fall back below the 10,000 figure as the rise in risk-taking behavior dampens the appeal of the reserve currency. Although we’re seeing the 30-minute relative strength index bounce back from oversold territory, there appears to be a bearish divergence in the oscillator, and the pullback from 10,065 may turn into a larger correction should the Fed Minutes fuel speculation for more easing. However, we may see a growing number of central bank officials soften their dovish tone for monetary policy after expanding the open-ended asset purchase program to $85/month, and the 2013 FOMC may endorse a more neutral stance as the recovery in the world’s largest economy becomes more broad-based. 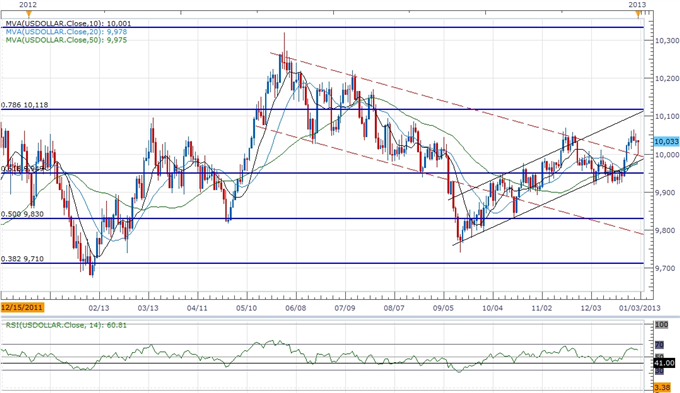 Indeed, U.S. manufacturing unexpectedly expanded in December, with the ISM index advancing to 50.7 from 49.5 the month prior, and the rebound in private sector activity may push the Fed to the sidelines as the economic recovery gradually gathers pace. The FOMC Minutes on tap for tomorrow may reveal a more upbeat assessment of the real economy amid the resilience in private consumption along with the budding recovery in the housing market. As the USDOLLAR carves out a higher low ahead of 2013, the bullish trend from back in September should continue to take shape, and we may see a more meaningful move towards the 10,100 figure if the fresh batch of central bank rhetoric saps bets for additional monetary support.

The greenback weakened against two of the four components, led by a 0.87 percent rally in the Australian dollar, and we may see the high-yielding currency continue to outperform over the next 24-hours of trading as market participants increase their appetite for risk. Although the Reserve Bank of Australia is set to announce their interest rate decision on February 4, Credit Suisse overnight index swaps continue to reflect a 56 percent chance for another 25bp rate cut, and we may see the central bank embark on its easing cycle throughout 2013 as the fundamental outlook for the region deteriorates. We are still bearish the AUDUSD as the pair struggles to push back above the 1.0600 figure, and the pair looks poised for large downturn as the RBA continues to target the benchmark interest rate.