Seasonal studies in forex markets show that the US Dollar (ticker: USDOLLAR) tends to strengthen against the Euro and Swiss Franc in January – can history repeat itself?

In the past 21 years, the Euro (or Deutsche Mark) has fallen against the US Dollar 14 times—or two-thirds of all instances. It is not immediately clear why the US Dollar might tend to appreciate in January, but we likewise note a similarly strong tendency towards Greenback weakness in December. In a sense the January rally might be a natural correction of December weakness.

Our recent US Dollar forecasts versus the Euro and Swiss Franc are admittedly on the opposite side of seasonal tendencies. As such, it will be critical to watch how the EURUSD and USDOLLAR start the month of January. Historical forex tendencies show that currencies will tend to set their highs/lows for the month in the first and last week. We might expect similar through January.

Forex Seasonality in the Euro/US Dollar 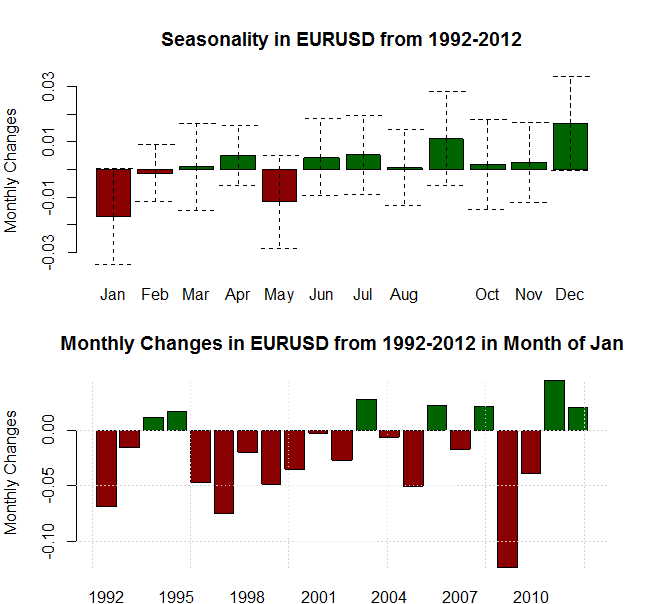 The Euro has shown a pronounced seasonal tendency to depreciate through the month of January, falling eight times in the 14 years since its official inception in 1999. If we use the Deutsch Mark as a proxy for the EURUSD from 1992, it has fallen 14 times in 21 years—or two-thirds of the time for an average decline of 170 pips.

There is no obvious reason for why the Euro might weaken in January, but we note that it has a similarly strong tendency to advance in December. In the past 21 years, the Euro/US Dollar (or Deutsche Mark/USD) has gained 12 out of 21 times for an average gain of 166 pips. January’s decline could simply be a correction following December’s strength.

Seasonality in the US Dollar Index 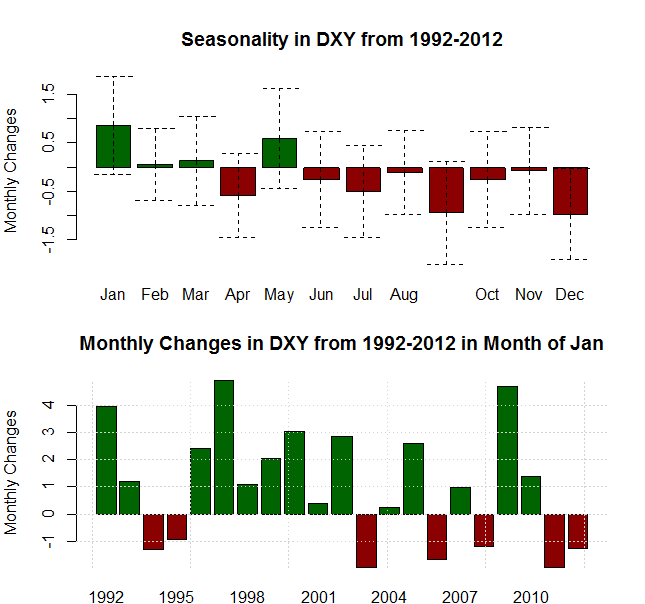 The US Dollar Index has a marked trend to appreciate in the month of January—rising in 14 of the past 21 occurrences. There is no immediately obvious reason for such a bounce, but it’s likewise worth noting that the month of December has historically been negative for the USD. Such strength could be a natural correction of December weakness. 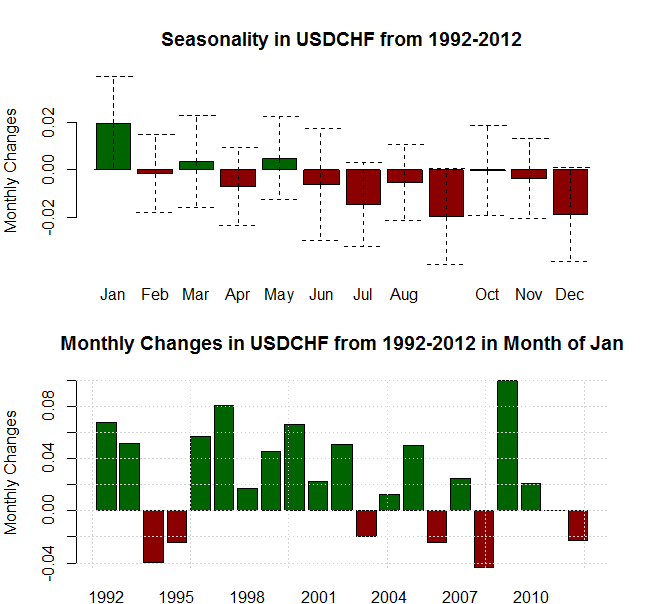 The US Dollar has historically strengthened against the Swiss Franc through the month of January—the USDCHF has closed higher in 15 out of the past 21 years. As with the EURUSD, this seems a natural correction of the US Dollar’s tendency to weaken in the month of December. 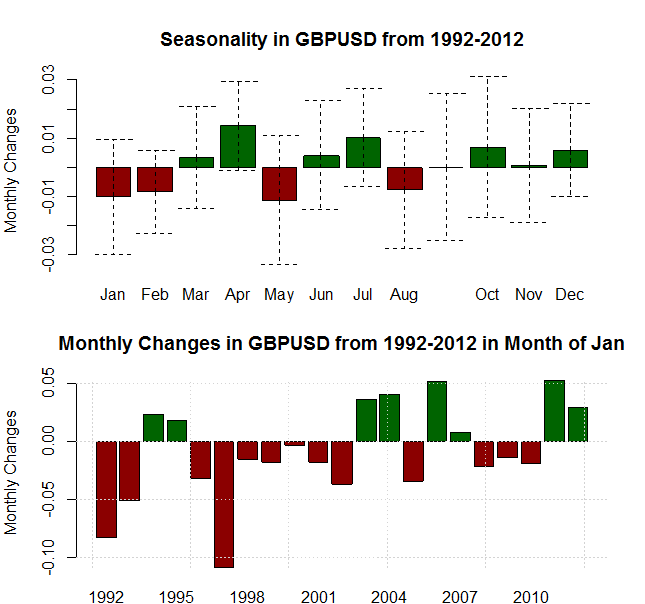 The British Pound shows a weak pattern towards declines through the month of January, falling in 13 of the past 21 years. Yet the past 10 years have shown no such tendency—6 years of advances and 4 declines. Our seasonal trading bias is subsequently neutral. 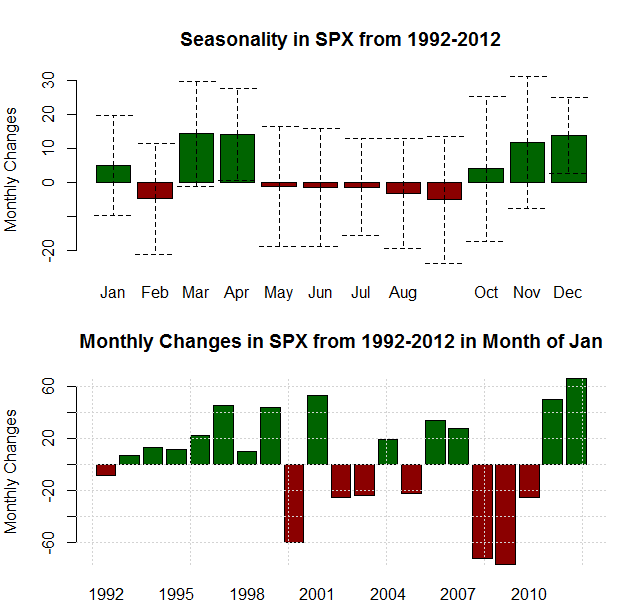 Seasonality in the S&P 500 leaves it modestly in favor of January gains, as the key equity index has posted gains in 13/21 years for an average gain of 3 points. 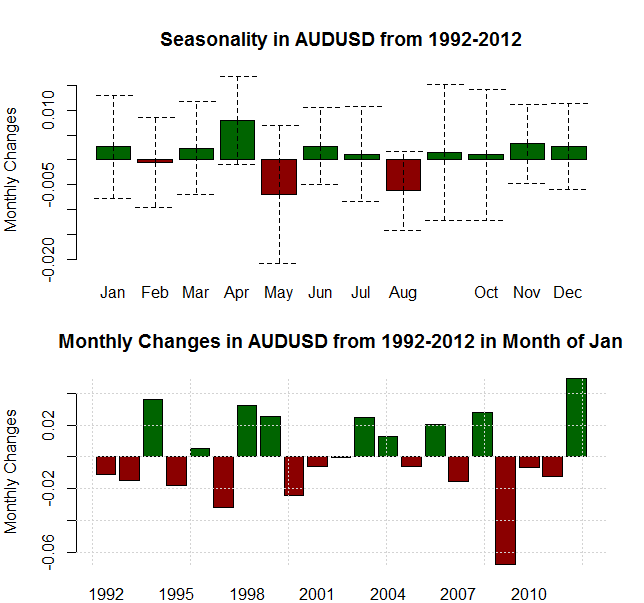 The Australian Dollar has not shown an especially strong tendency to appreciate or depreciate in the month of January. We have little seasonal trading bias. 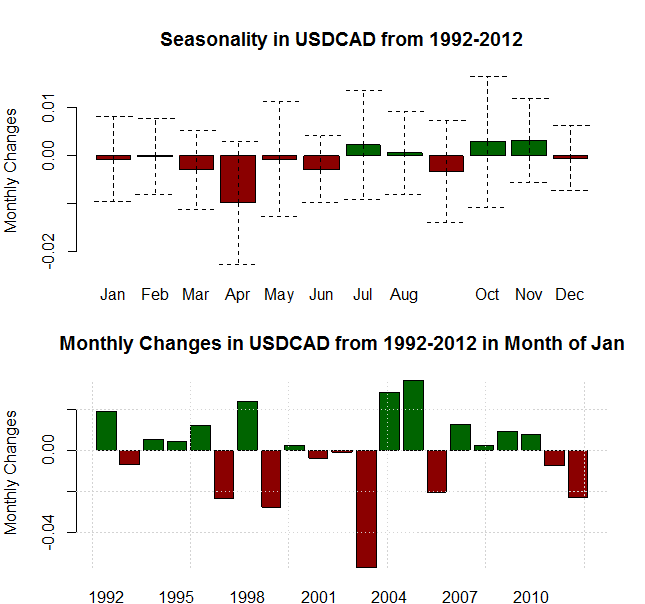 The Canadian Dollar shows weak seasonal tendencies in the month of January, and our seasonality forecasts are as a result neutral the USDCAD. 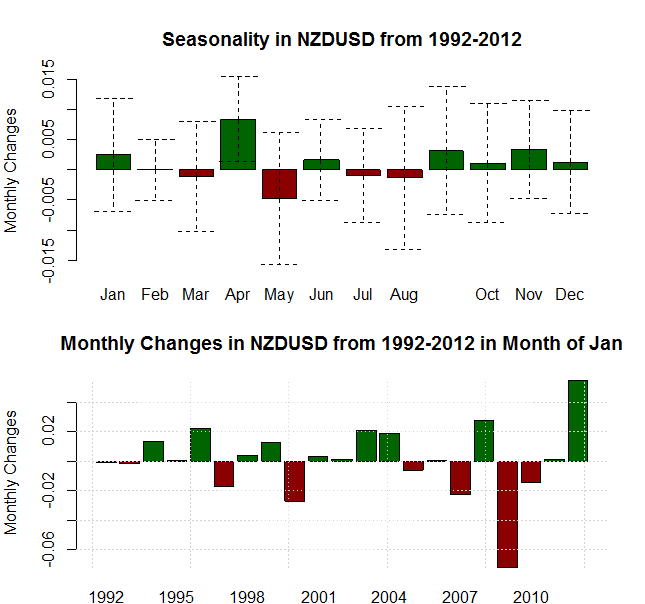 The New Zealand Dollar shows no important seasonal tendencies in the month of January. 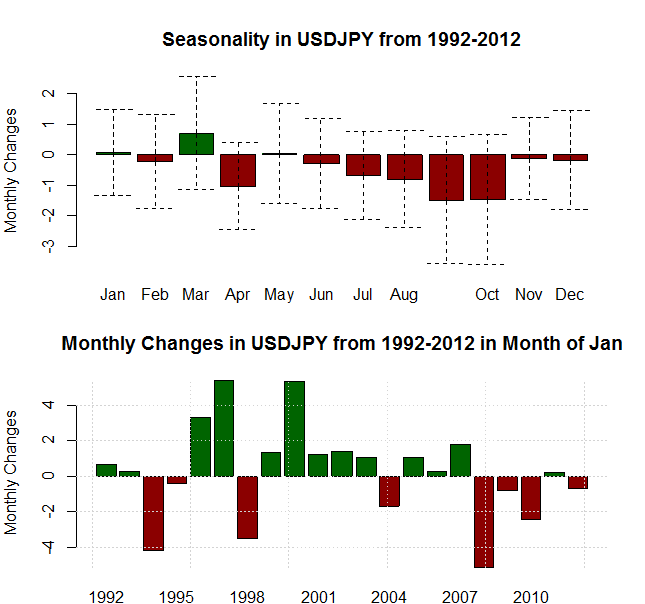 The Japanese Yen shows little tendency to move up or down through the month of January, rising and falling nearly the same number of times through the past two decades of trading.