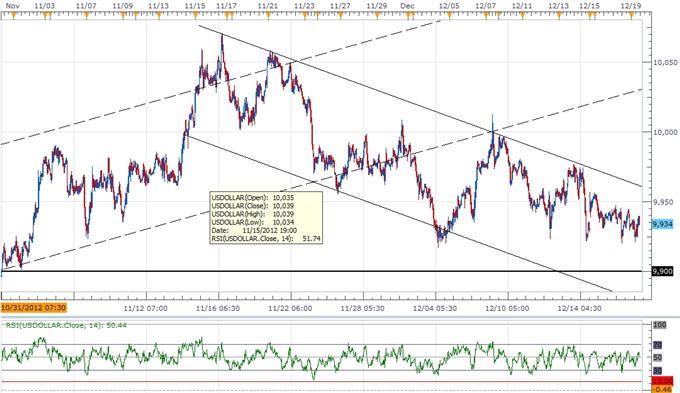 The Dow Jones-FXCM U.S. Dollar Index (Ticker: USDollar) is trading marginally higher from the open after moving 66 percent of its average true range, and we may see the reserve currency threaten the downward trend from earlier this year as it continues to carve a short-term base above the 9,900 figure. As the index fails to threaten the monthly low (9,917), the dollar appears to be coiling up for a larger move to the upside, and we may see the greenback work its way back towards the 10,000 figure as the developments coming out of the world’s largest economy is expected to encourage an improved outlook for growth. As the final reading for 3Q GDP is expected to show a small uptick in the growth rate, a positive development may spark a bullish reaction in the dollar, and we may see a growing number of Fed officials adopt a more neutral tone in 2013 as the recovery gradually gathers pace. 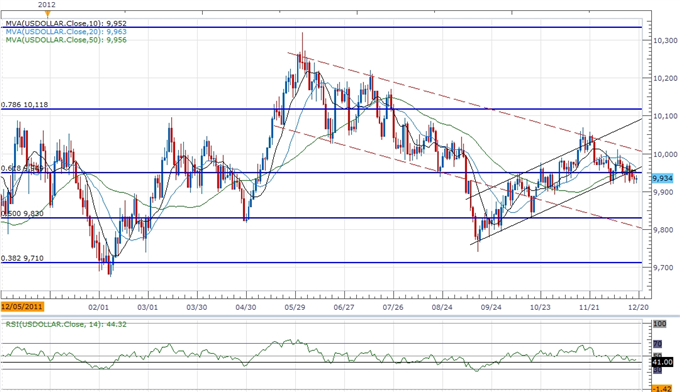 As the relative strength index continues to hold above near-term support (41), the USDOLLAR looks poised for a more meaningful rebound ahead of the New Year, and we may see the index make a run at the 78.6 percent Fibonacci retracement around 10,118 as it carves out a higher low going into 2013. Nevertheless, Dallas Fed President Richard Fisher continued to speak out against the open-ended asset purchase program, arguing that the quantitative easing is an ‘insufficient tool to spark job creation,’ and went onto say that the U.S. Congress need to draw up public programs that ‘incentivizes American businesses to invest in job creation.’ Beyond the Fiscal Cliff, the ongoing improvements in the U.S. economy should push the FOMC to the sidelines over the near to medium-term, and the central bank may face limited scope to implement additional monetary stimulus in the following year as growth and inflation picks up.

The greenback strengthen against two of the four components, led by a 0.42 percent decline in the Australian dollar, while the Japanese Yen shed 0.06 percent ahead of the Bank of Japan’s (BoJ) last interest rate decision for 2012. Indeed, we may see the BoJ carry its current policy into the following year as incoming Prime Minister Shinzo Abe threatens the central bank’s independence, but we should see Governor Masaaki Shirakawa continue to embark on an easing cycle in the following year in an effort to stem the threat for deflation. As the new leader pressures the BoJ to implement an unlimited asset purchase program, speculation for a further expansion in the balance sheet may continue to dampen the appeal of the Japanese Yen, but the USDJPY looks poised for a correction as the relative strength index on the pair comes up against resistance around the 78 figure. In turn, we may see the Yen regain its footing over the coming days, but we may see a very shallow pullback in the exchange rate as the fundamental outlook for the world’s third-largest economy remains weak.