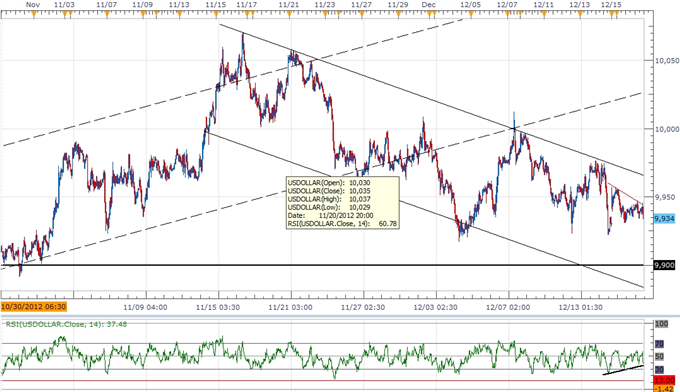 The Dow Jones-FXCM U.S. Dollar Index (Ticker: USDollar) is 0.05 percent lower from the open after moving 41 percent of its average true range, and the greenback may continue to retrace the decline from earlier this month as there appears to be a bullish divergence in the 30-minute relative strength index. Indeed, the upward trend in the oscillator may produce another test of trendline resistance, and we may see the index threaten the downward trend from earlier this year as it continues to build a short-term base above the 9,900 figure. However, the dollar may continue to track sideways over the next 24-hours of trading as the economic docket remains fairly light for the remainder of the week, and we would need to see a move back towards the 10,000 region to adopt a bullish outlook for the greenback. 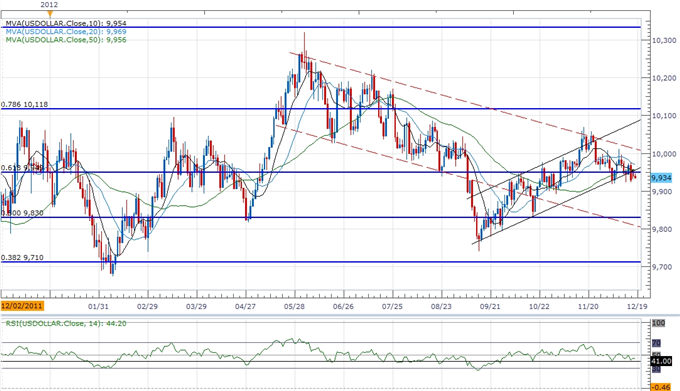 We’re still keeping a close eye on the relative strength index as it continues to holds above near-term support (41), and the rebound in the oscillator may pave the way for a bullish breakout as the dollar continues to carve out a higher low in December. Nevertheless, with Dallas Fed President Richard Fisher scheduled to speak on the economy later today, the central bank hawk may continue to criticize the open-ended asset purchase program, and we should see Mr. Fisher continue to talk down speculation for more quantitative easing as the economic recovery becomes more broad-based. As growth and inflation picks up, the FOMC may stick to the sidelines throughout the first-half of 2013, and we may see a growing number of central bank officials adopt a more neutral tone in the following year as the world’s largest economy gets on a more sustainable path.

Despite the sideways price action in the index, the greenback gained ground against two of the four components, led by a 0.15 percent decline in the Japanese Yen, which was followed by a 0.11 percent drop in the Australian dollar. Indeed, the higher-yielding currency is struggling to hold its ground as the Reserve Bank of Australia (RBA) Minutes struck a dovish outlook for monetary policy, and it seems as though the central bank will continue to embark on its easing cycle in the following year as Governor Glenn Stevens looks to encourage a stronger recovery. According to Credit Suisse overnight index swaps, market participants still see a 63 percent chance for a 25bp rate cut at the February 4 meeting, and expectations for lower borrowings casts a bearish forecast for the AUDUSD as the fundamental outlook for the $1T economy remains weak. As the AUDUSD struggles to hold above the 1.0500 figure, we’re seeing the relative strength index stall out ahead of overbought territory, and the pair looks poised for a key reversal as the near-term rally fails to produce a test of the September high (1.0623).