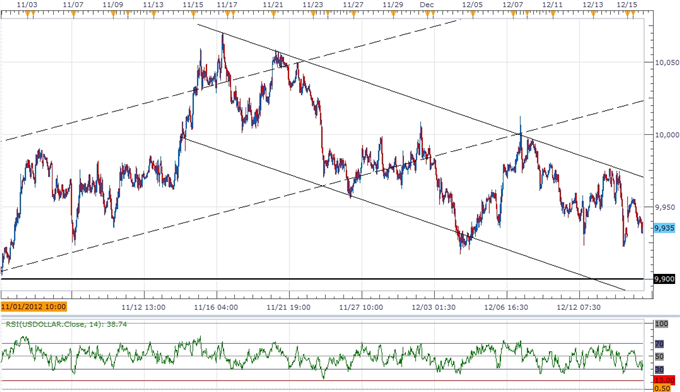 Although the Dow Jones-FXCM U.S. Dollar Index (Ticker: USDollar) remains 0.04 percent higher from the open, the greenback may weaken further as it comes off of trendline resistance, and we may see the bearish trend continue to take shape ahead of the New Year as the Federal Reserve maintains a fairly dovish tone for monetary policy. However, as the index fills in the gap from the Sunday open, the rebound in the 30-minute relative strength index may keep the pair within Friday’s range, and we may see the index threaten the downward trending channel yet again as it appears to be building a short-term base above the 9,900 figure. As the economic docket for the U.S. remains fairly light for this week, risk trends may heavily influence the greenback in the days ahead, but we may see a growing number of Fed officials talk up the dollar as the region gets on a more sustainable path. 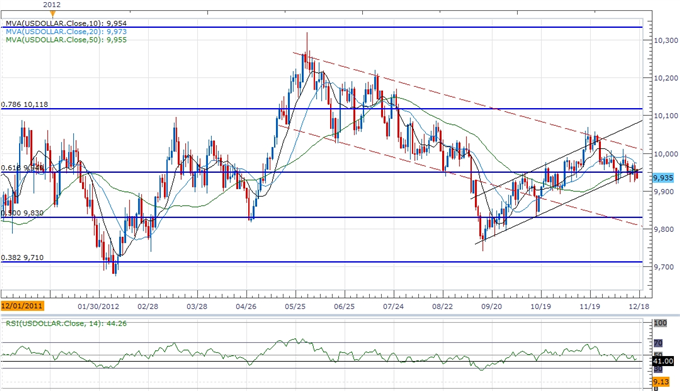 Indeed, Richmond Fed President Jeffrey Lacker, the lone dissenter on the FOMC, argued that it would ‘take three years’ for the central bank to achieve a 6.5 percent unemployment rate as monetary policy remains a blunt tool, and went onto say that the committee looks willing to ‘test the very limits’ of their credibility on inflation as the Fed continues to push into unchartered territory. As the FOMC aims to encourage a stronger recovery, it seems as though Chairman Ben Bernanke will preserve a dovish outlook in the first-half of the following year, but the 2013 FOMC may endorse a more neutral tone for monetary policy as the economic recovery is expected to gather pace over the near to medium-term. Nevertheless, we may see the USDOLLAR continue to give back the rebound from September (9,740) as it fails to maintain the bullish trend, but the recent weakness could be a false break as the relative strength index continues to find interim support around the 41 region.

Two of the four components advanced against the greenback, led by a 0.17 percent rally in the British Pound, and the GBPUSD may continue to track higher over the next 24-hours of trading as heightening price pressures in the U.K. dampens the outlook for additional monetary support. Although the U.K. Consumer Price report is expected to show the headline reading for inflation expanding 2.7% for the second month, we’re expecting to see an uptick in the core index, and a strong print may spark a near-term rally in the sterling as the Bank of England (BoE) appears to be slowly moving away from its easing cycle. As the Monetary Policy Committee sees a greater risk for inflation, the meeting minutes may curb bets for more quantitative easing as the central bank expects price growth to hold above the 2 percent target over the next two-years. As the GBPUSD finally clears the 23.6 percent Fibonacci retracement from the 2009 low to high (1.6200), we may see the pair make a run at the September high (1.6308), but we will closely watch the relative strength index as it pushes towards overbought territory.