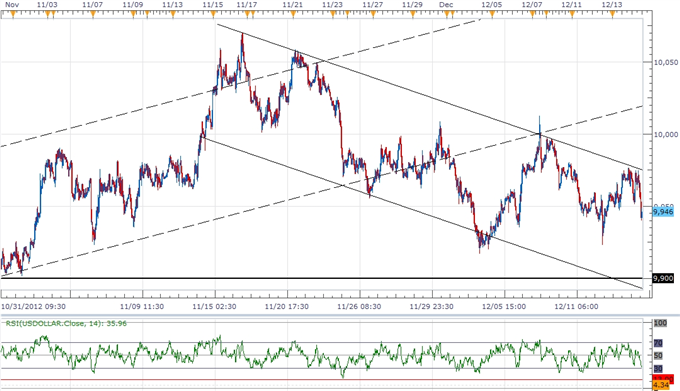 The Dow Jones-FXCM U.S. Dollar Index (Ticker: USDollar) is 0.15 percent lower from the open after moving 75 percent of its average true range, and the downward trend in the greenback may continue to pan out in the week ahead as easing price pressures in the world’s largest economy fuels speculation for additional monetary support. As the index falls back from trendline resistance, we may see the index make another run at the 9,900 figure, but we will keep a close eye on the 30-minute relative strength index as it approaches oversold territory. Nevertheless, the recent efforts taken by the Federal Reserve continues to come under scrutiny as the ballooning balance sheet raises the threat for inflation, and we may see a growing number of central bank officials argue against further easing as the world’s largest economy gets on a more sustainable path. 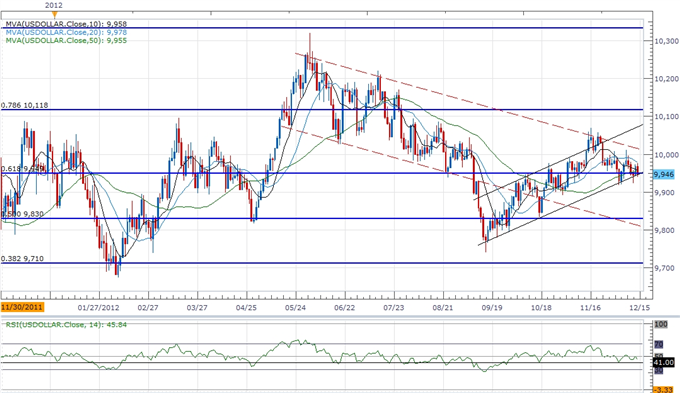 Indeed, we’re seeing the USDOLLAR threaten the upward trend from September yet again, but it seems as though there’s a growing rift within the Fed as policy makers see a more broad-based recovery in the year ahead. Richmond Fed President Jeffrey Lacker, the sole dissenter on the FOMC, argued that ‘monetary policy has only a limited ability to reduce unemployment, and such effects are transitory and generally short-lived,’ and went onto say that ‘further monetary stimulus runs the risk of raising inflation and destabilizing inflation expectations.’ At the same time, Dallas Fed President Richard Fisher warned that the central bank ‘may never be able to leave this position’ as the committee introduces a ‘qualitative guidance’, and stated that the FOMC’s ‘efficacy is declining over time’ as Chairman Ben Bernanke continues to embark on quantitative easing. In light of the recent weakness in the USDOLLAR, we may see the relative strength index come up against near-term support (41), but the greenback may regain its footing in the week ahead as the economic docket is expected to encourage an improved outlook for growth.

The greenback weakened across the board, led by a 0.42 percent rally in the Euro, which was following by a 0.20 advance in the Australian dollar. We’re seeing the Australian dollar extend the advance from earlier this month as market participants continue to raise their appetite for risk, but the Reserve Bank of Australia (RBA) Minutes on tap for the following week should the central bank preserve a dovish tone for monetary policy. After lowering the benchmark interest rate to 3.00%, Governor Glenn Stevens seemed to endorse a wait-and-see approach for 2013, but we may see the central bank continue to embark on its easing cycle next year as the outlook for growth and inflation remains weak. As China, Australia’s largest trading partner, moves away from its export-drive market, the structural shift in the world’s second largest economy may continue to drag on the $1T economy, and we may see a short-term correction in the AUDUSD as the relative strength index approaches overbought territory.