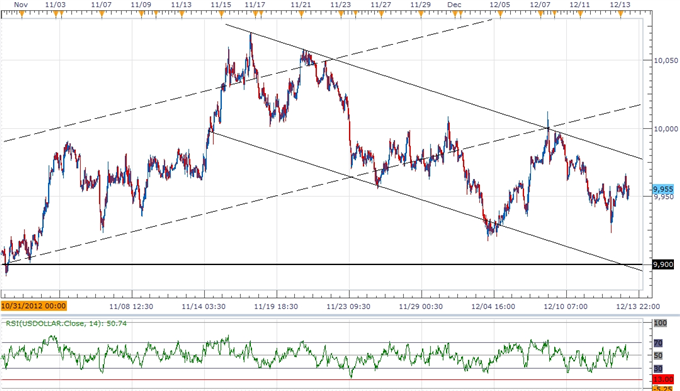 Although the Dow Jones-FXCM U.S. Dollar Index (Ticker: USDollar) remains 0.06 percent higher from the open, we may see the greenback consolidate going into the end of the week as the 30-minute relative strength index reverts back from oversold territory. In turn, the downward trending channel may continue to take shape over the remainder of the year, and bearish sentiment surrounding the USD may get carried into the following year as the Federal Reserve retains a dovish tone for monetary policy. However, as headlines coming out of the EU Summit fails to prop up investor confidence, a drop in risk-taking behavior should increase the appeal of the reserve currency, and we may see the index push back towards the 10,000 figure as the new initiatives taken on by the Federal Open Market Committee (FOMC) comes under scrutiny. 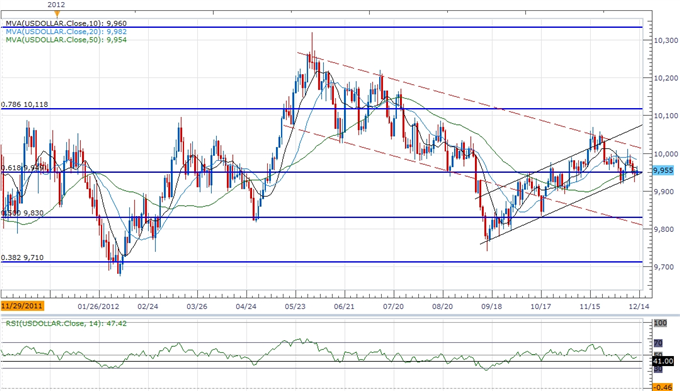 Although Fed Chairman Ben Bernanke argued that the expansion in the open-ended asset purchase program does not constitute more monetary stimulus, U.S. lawmakers labeled the move as ‘a continuation of unnecessary and dangerous monetary policy to make up for failed fiscal policy,’ and warned that the central bank has the ‘wrong prescription’ as the ‘Fiscal Cliff’ continues to threaten the economic recovery. However, as the Fed extends its dollar-swap agreements through February 2014, we may see the FOMC remain supportive in the following year, and the central bank may keep the open to expand its balance sheet further as the committee looks for a stronger recovery. Nevertheless, as the index preserves the bullish trend from September, with the relative strength holding above support (41), the set of higher lows in December could pave the way for a higher high, and we will look for another run at 10,100 figure once the index clears the downward trend from the June highs.

Three of the four components weakened against the greenback, led by a 0.40 percent decline in the Japanese Yen, while the British Pound shed 0.11 percent as it holds within the previous day’s range. Indeed, the Bank of England (BoE) Minutes highlight the biggest event risk for the following week, but another uptick in the headline reading for U.K. inflation may pave the way for another test of the 23.6 percent Fib from the 2009 low to high around 1.6200 as the central bank drops its dovish tone for monetary policy. As above-target inflation threatens the outlook for price stability, the BoE remains poised to shift gears in 2013, and we should see the Monetary Policy Committee (MPC) slowly move away from its easing cycle as the region emerges from the double-dip recession.