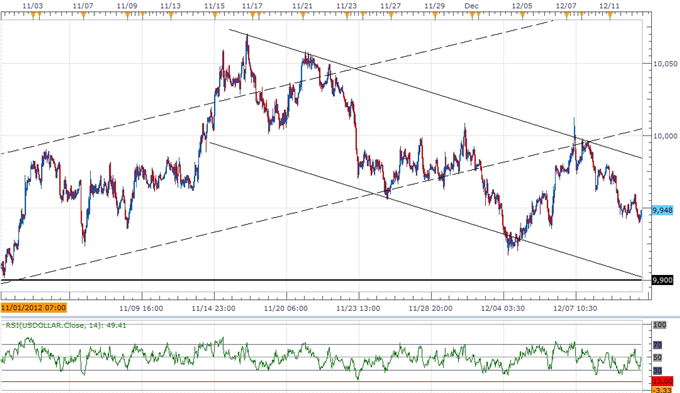 Forex: USDOLLAR At Critical Juncture- All Eyes On Chairman Bernanke

The Dow Jones-FXCM U.S. Dollar Index (Ticker: USDollar) is relatively flat from the open amid bets for additional monetary support, and the reserve currency may face a sharp selloff during the North American trade as market participants see the Federal Reserve offsetting ‘Operation Twist’ with additional asset purchases. Indeed, a further expansion in the central bank may trigger a move back towards the 9,900, but we may see the dollar track higher going into the rate announcement as the 30-minute relative strength index bounces back from oversold territory. As former trendline support appears to be acting as new resistance, we’re starting to see the index carve out a bearish trend, and dollar may weaken further in the following year should the Fed carry its easing cycle into the following year. 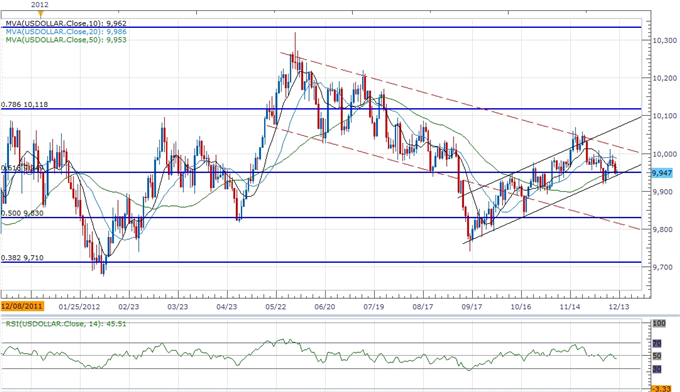 Indeed, market participants appear to be pricing an expansion in the Fed’s open-ended asset purchase program as ‘Operation Twist’ comes to an end, but the central bank may continue to stick to the sidelines as the economic recovery gradually gathers pace. The central bank may hold off on further easing as the U.S. Congress struggles to address the ‘Fiscal Cliff,’ and the Fed may put more pressure on the government to tackle the ballooning deficit as it continues to threaten the long-term outlook for the world’s largest economy. As the Fed sees a more broad-based recovery and holds an improved outlook for 2013, we may see a growing number of central bank officials drop their dovish tone for monetary policy, and the FOMC may scale back its willingness to expand the balance sheet further as growth and inflation picks up. As the USDOLLAR pivots around the 61.8 percent Fibonacci retracement around 9,949, the index still appears to be carving a higher low in December, and we may see the greenback threaten the downward trend from earlier this year should the Fed slowly move away from its easing cycle.

The greenback lost ground against three of the four counterparts, led by a 0.26 percent advance in the Euro, while the Japanese Yen bucked the trend as the USDJPY rallied to a fresh monthly high of 82.92. Beyond the FOMC interest rate decision, the Yen may face additional headwinds ahead of the December 16 elections amid the risk of a political shift in Japan, but a multiparty coalition government may increase the appeal of the low-yielding currency as it dampens the scope of seeing the Bank of Japan (BoJ) of taking a more aggressive approach in addressing the risks surrounding the region. As the relative strength index on the USDJPY threatens overbought territory, the technical outlook points to a short-term correction in the exchange rate, and we may see the Yen regain its footing next week should the elections fail to yield a strong partnership that would put increased pressure on the BoJ to expand monetary policy further.