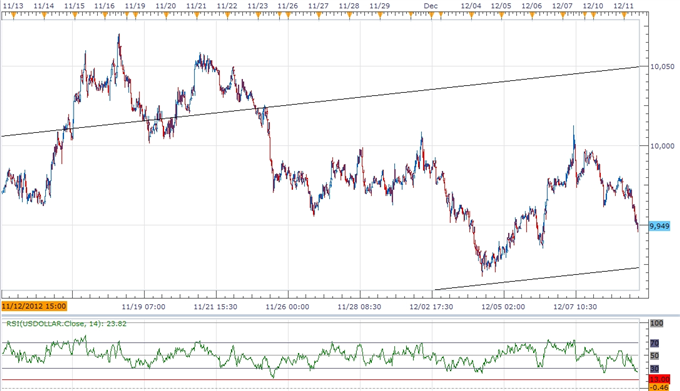 Although the Dow Jones-FXCM U.S. Dollar Index (Ticker: USDollar) remains 0.23 percent lower from the open, we’re seeing the 30-minute relative strength index come off of oversold territory, and the rebound in the oscillator may produce a small correction ahead of the Federal Open Market Committee (FOMC) interest rate decision as the positive developments coming out of the world’s largest economy curbs bets for more quantitative easing. In turn, we may see the index work its way back towards the 10,000 figure, but headlines coming out of Europe may continue to dampen the appeal of the reserve currency as Greece looks poised to achieve the EUR 30B target for its bond-buyback program. Nevertheless, we may see the Fed continue to soften its dovish tone for monetary policy amid the resilience in private sector consumption along with the budding recovery in the housing market, and the central bank may carry its wait-and-see approach into the following year as Chairman Ben Bernanke sees an improved outlook for 2013. 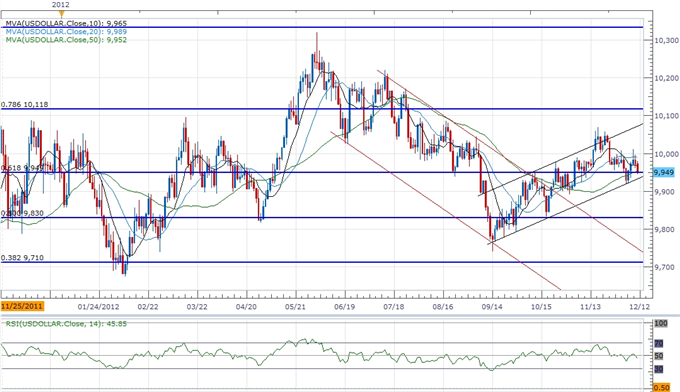 With ‘Operation Twist’ set to expire, there’s bets that the FOMC will expand its open-ended asset purchase program to $85B a month in an effort to preserve its highly accommodative policy stance, but the central bank may be nearing the end of its easing cycle as growth and inflation picks up. In turn, the committee should start to discuss a tentative exit strategy in the following year, but the complications in unwinding the Fed’s balance sheet may become a growing theme in 2013 as it risks disrupting the financial markets. Should the FOMC offset ‘Operation Twist,’ the initial reaction for further asset purchases may spark a move back towards the 9,900 figure, but a less dovish Fed could pave the way for a higher high in the index as it maintains the upward trending channel carried over from back in September.

The greenback weakened against three of the four counterparts, led by a 0.43 percent rally in the Euro, which was followed by a 0.28 percent advance in the Australian dollar. Indeed, the AUDUSD continues to threaten the 1.0500 figure as the Reserve Bank of Australia (RBA) signals an end to its easing cycle, but we may see the central bank take additional steps to shore up the $1T economy as the fundamental outlook for the region remains tilted to the downside. According to Credit Suisse overnight index swaps, market participants are pricing a 62 percent chance for another 25bp rate cut at the February 4 policy meeting, while borrowing costs are expected to fall by another 50bp over the next 12-months as China – Australia’s largest trading partner – moves away from its export-drive market to a more consumer-based economy. As the resource boom comes to an end, we should see the RBA take additional steps to stem the downside risks for growth and inflation, and we will maintain a bearish outlook for the AUDUSD as market participants see further rate cuts over the coming months.