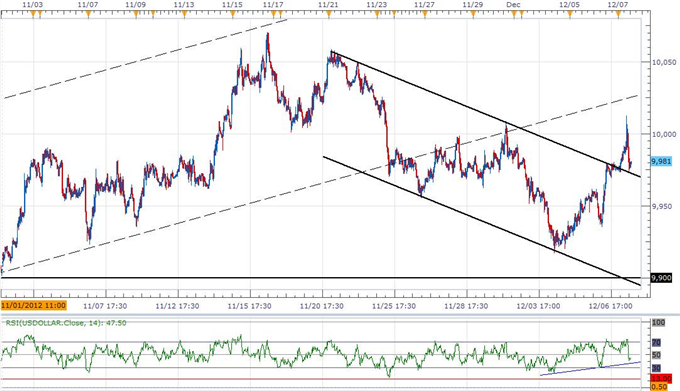 Forex: USDOLLAR Outlook Propped Up By NFPs- All Eyes On FOMC

The Dow Jones-FXCM U.S. Dollar Index (Ticker: USDollar) remains 0.08 percent higher from the open after moving 104 percent of its average true range, and the rebound from 9,917 may get carried into the following week as the fundamental outlook for the world’s largest economy improves. Indeed, the 146K rise in U.S. Non-Farm Payrolls increased the appeal of the dollar ahead of the Federal Open Market Committee (FOMC) interest rate decision, and the meeting may prop up the reserve currency in the week ahead should the central bank carry its wait-and-see approach into the following year. As the 30-minute relative strength index appears to be carving an upward trend, we may see former trendline resistance act as new support, and the dollar may continue to retrace the decline from the previous month amid the more broad-based recovery in the world’s largest economy. Despite the aftermath of Hurricane Sandy, the ongoing improvement in U.S. data may encourage the FOMC to strike a more neutral tone for monetary policy, and we may see a growing number of Fed officials scale back their willingness to expand the balance sheet further as the economy gets on a more sustainable path. However, with ‘Operation Twist’ set to expire, there’s speculation that the Fed will expand its opened-ended asset purchase program to $80B a month next week, and we will keep a close eye on the updated interest rate forecast as the recovery is expected to gradually gather pace in the following year. As market participants weigh the outlook for monetary policy, we may see the dollar consolidate ahead of the rate decision, but we will continue to look for further dollar strength as the relative strength index remains supported by the 39 figure.

The greenback advanced against three of the four components, led by a 0.27 percent decline in the Euro, while the Japanese Yen bucked the trend, with the USDJPY preserving the range bound price action carried over from the previous month. With the December 16 elections quickly approaching, a political shift in the world’s third-largest economy may continue to dampen the appeal of the Yen as challenger Shinzo Abe encourages the Bank of Japan to adopt an unlimited asset purchase program. As Japanese policy makers put increased pressure on the BoJ to weaken the local currency, we should see the central bank carry its easing cycle into the following year, but a multi-party coalition government may increase the appeal of the yen should lawmakers struggle to meet on common ground. As the relative strength index on the USDJPY continues to come off of overbought territory, the 82.82 figure should keep the exchange rate capped over the near-term, and the pair may continue to face range-bound prices in the days ahead as the elections come into focus.