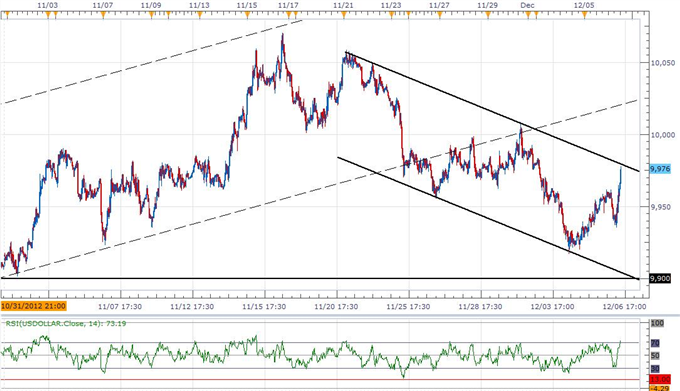 Although the Dow Jones-FXCM U.S. Dollar Index (Ticker: USDollar) remains 0.21 percent higher from the open, expectations for a weaken employment figure may drag on the greenback, and we may see a short-term reversal in the reserve currency as the 30-minute relative strength index pushes into overbought territory. As the bearish sentiment surrounding the U.S. dollar produces a downward trend in the index, the pullback from the November high (10,071) may spark a run at the 9,900 figure, and the greenback may trade heavy over the remainder of the year should the Federal Open Market Committee (FOMC) take additional steps to encourage a faster recovery. However, a better-than-expected NFP report may trigger a bullish breakout in the index as it dampens the scope for additional monetary support, and we may see the dollar track sideways ahead of the rate decision as market participants weigh the prospects for future policy. 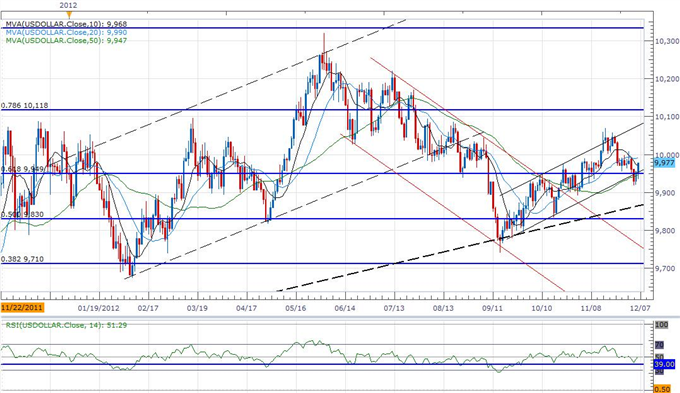 Although we’re seeing the USDOLLAR struggle to maintain the upward trend from back in September, we’re seeing the relative strength index continue to find support around the 39 figure, and the rebound in the oscillator encourages a bullish outlook for the greenback as it appears to be carving a higher low just above the 9,900 region. Nevertheless, NFPs are expected to increase 86K in November following the aftermath of Hurricane Sandy, but the recent upward trend in job growth may generate a larger-than-expected rise in employment as the economic recovery gradually gathers pace. In turn, a strong jobs figure may fuel a more meaningful rebound in the index, and we may see the dollar work its way back above 10,000 as the fundamental outlook for the U.S. improves.

Two of the four components weakened against the greenback, led by a 0.86 percent decline in the Euro, while the British Pound struggled to hold its ground even as the Bank of England (BoE) preserved its current policy in December. Nevertheless, the BoE Minutes due out on December 19 may reveal a more hawkish tone for monetary policy amid the stickiness in price growth, and we may see a growing number of central bank officials scale back their willingness to expand the balance sheet further as the headline reading for inflation is expected to hold above the 2% over the next two-years. In turn, the shift in the policy outlook should prop up the sterling over the remainder of the year, and the bullish sentiment surrounding the British Pound should gather pace in 2013 as the central bank appears to be slowly moving away from its easing cycle.