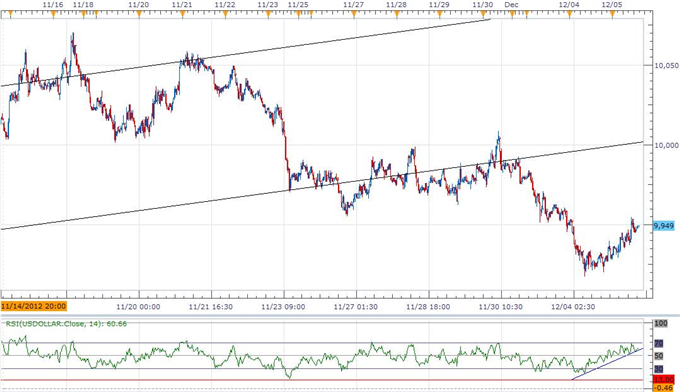 Forex: USD To Consolidate Ahead Of NFPs- JPY Held Back By 81.70

The Dow Jones-FXCM U.S. Dollar Index (Ticker: USDollar) remains 0.19 percent higher on the day after moving 93 percent of its average true range, and the greenback may continue to track higher over the next 24-hours of trading as the pickup in service-based activity paired with the rise in private demands dampens the Fed’s scope to expand monetary policy further. However, as the 30-minute relative strength index falls back from overbought territory, a bearish break on the oscillator may lead to further losses ahead of the highly anticipated U.S. Non-Farm Payrolls report, and a marked slowdown in job growth may produce another selloff in the index, and the dollar may trade heavy going into the FOMC interest rate decision on December 12 amid bets for an expansion in the open-ended asset purchase program. 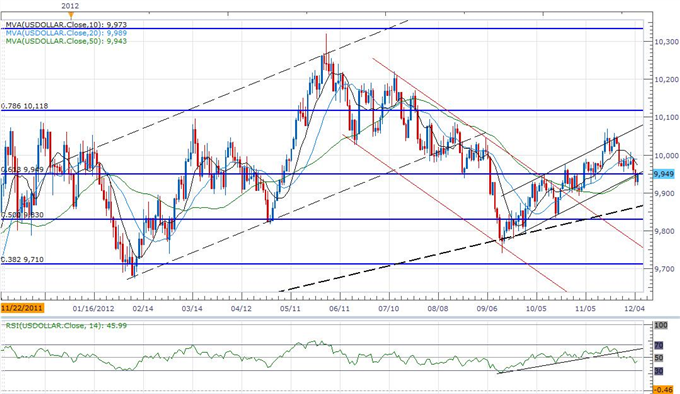 Although the ADP employment report casts a dour outlook for NFPs, the budding recovery in the housing market along with the resilience in private sector consumption encourages an improved outlook for growth, and the more broad-based recovery in the worlds largest economy may prompt the Fed to endorse a neutral policy stance next week as highly accommodative policy stance raises the long-term outlook for inflation. However, as ‘Operation Twist’ is set to expire, the FOMC may widen its new quantitative easing program to maintain the current $85B monthly purchases, but we may see the central bank signal an end to its easing cycle as the recovery is expected to gather pace in 2013. As the USDOLLAR struggles to hold above the 61.8 percent Fibonacci retracement around 9,949, the index may fall back towards the 50.0 percent Fib around 9,830, but the Fed rate decision could spark a shift in the near-term outlook as market participants weigh the prospects for future policy.

The greenback rallied across the board, led by a 0.57 percent decline in the Japanese Yen, but the recent weakness in the low-yielding currency may be short-lived as the USDJPY looks poised for a short-term reversal. Despite concerns of a political shift in the world’s third-largest economy, the technical outlook favors a short-term decline in the exchange rate as the relative strength index falls back from overbought territory, and we will look for a move below the 81.70 figure – the 61.8 percent Fib retracement from the 2011 high to low – to see a more meaningful push to the downside as the pair stubbornly maintains the range-bound price action carried over from the previous week. Ahead of the December 16 elections, the FOMC rate decision could have a major impact on the exchange rate should we see a shift in the policy outlook, and a less dovish Fed may trigger another run at the 83.00 figure as it dampens the outlook for more QE.