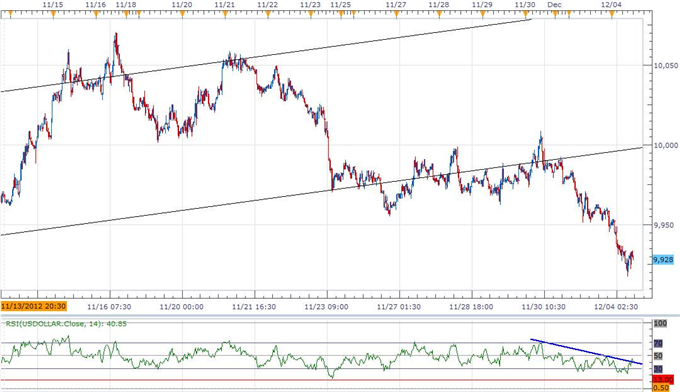 The Dow Jones-FXCM U.S. Dollar Index (Ticker: USDollar) remains 0.33 percent lower from the open after moving 117 percent of its average true range, and the bearish sentiment surrounding the reserve currency may produce further losses over the next 24-hours of trading as soft support around the 9,950 figure gives way. As hopes surrounding Greece’s bond buy-back program fuels risk-taking behavior, the rebound in market sentiment may continue to dampen the appeal of the reserve currency, and the recent weakness in the greenback may gather pace over the remainder of the year as it struggles to maintain the upward trend carried over from September. However, as the 30-minute relative strength index bounce from oversold territory, the bullish breakout in the oscillator could prop up the dollar ahead of the highly anticipated Non-Farm Payrolls report, and the reserve currency may regain its ahead of the FOMC interest rate decision on December 12 as the central bank appears to be softening its dovish tone for monetary policy. 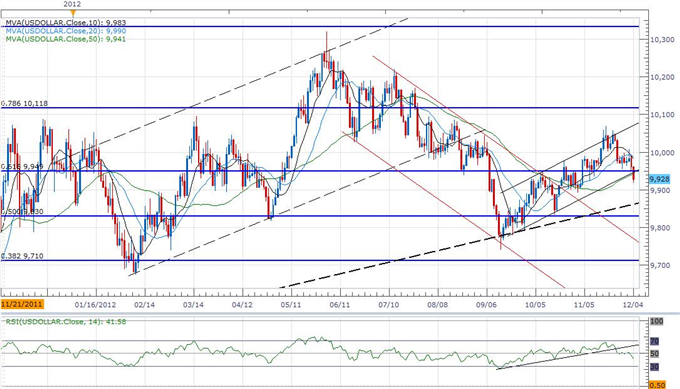 Although Boston Fed President Eric Rosengren and St. Louis Fed President James Bullard – who’s scheduled to serve on the FOMC in 2013 – saw scope to expand the open-ended asset purchase program beyond the $40B monthly limit, Mr. Bullard warned ‘that an outright purchase program has more impact on inflation and inflation expectations than a twist program.’ The St. Louis Fed President went onto say that ‘replacing the expiring twist program one-for-one with outright purchases of longer-dated Treasuries is likely a more accommodating policy,’ and we may see the FOMC stick to the sidelines in December as the more broad-based recovery raises the outlook for inflation. Nevertheless, as the USDOLLAR fails to maintain the bullish trend, a close below the 50-Day SMA (9,941) may produce a move back towards the 50.0 percent Fibonacci retracement around 9,830, but a less dovish Fed may bring about a more meaningful rebound in the index as it dampens the scope of seeing a further expansion in quantitative easing.

The greenback continued to weaken against its major counterparts, led by a 0.55 percent advance in the Australian dollar, and the high-yielding currency may continue to retrace the decline from the September high (1.0623) as the Reserve Bank of Australia softens its dovish tone for monetary policy. Despite the 25bp rate cut, the aussie tracked higher following rate decision as the central bank talked down bets for lower borrowing costs in 2013, but the lack of momentum to clear the 1.0500 figure may produce a reversal in the exchange rate as the relative strength index continues to find resistance around the 59 level. As the AUDUSD carves a lower high coming into December, the technical outlook favors a bearish forecast for the remainder of the year, and we may see the pair fall back towards the 50.0 percent Fib from the 2011 high to low (1.0230) as it struggles to recoup the losses from earlier this year.