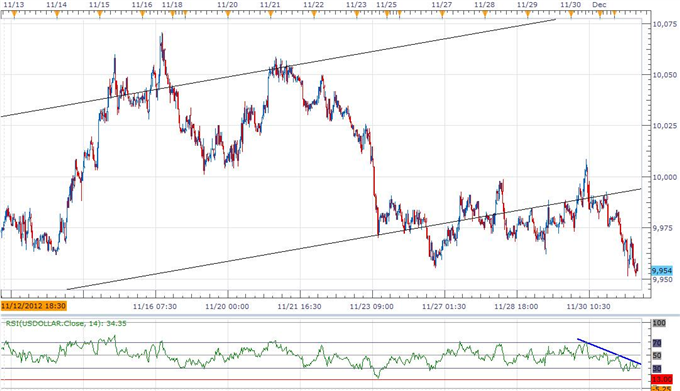 Although the Dow Jones-FXCM U.S. Dollar Index (Ticker: USDollar) is 0.37 percent lower from the open, the rebound in the 30-minute relative strength index should prop up the greenback over the next 24-hours of trading, and we will look for a more meaningful move to the upside once the oscillator breaks out of the bearish trend. With five major central bank interest rate decisions on tap for this week, headlines coming out of the G10 countries may spark whipsaw-like price action ahead of the highly anticipated Non-Farm Payrolls report due out on Friday, but the dollar may struggle to hold its ground ahead of the development as job growth is expected to expand at a slower pace in November. Nevertheless, the headline driven-market may continue to prop up the USD as currency traders scale back their appetite for risk, and we may see a flight to safety in the coming days as the major central banks across the globe strike a more cautious tone for the world economy. 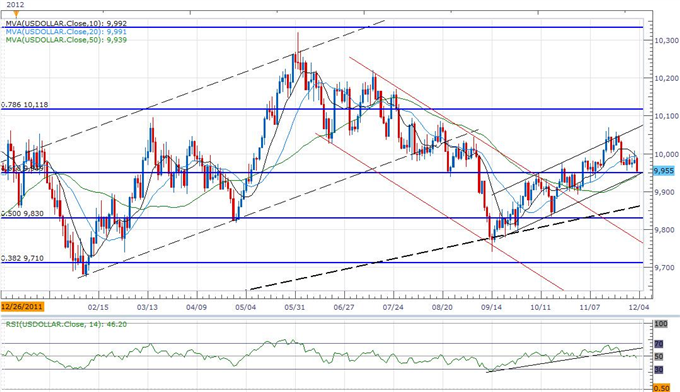 Indeed, Fed doves continued to make a case for more easing, with Minneapolis Fed President Narayana Kocherlakota arguing that monetary policy remains ‘too tight,’ while Chicago Fed President Charles Evans stated that ‘more accommodation would help lead to better economic outcomes’ amid the ongoing slack within the world’s largest economy. As the Federal Open Market Committee keeps the door open to expand its balance sheet further, the central bank may see scope to increase its open-ended asset purchase program beyond the $40B monthly limit, but we may the board stick to the sidelines in December as the region gets on a more sustainable path. As the USDOLLAR holds above the 61.8 percent Fibonacci retracement around 9,949, the upward trending channel from back in September may continue to take shape over the remainder of the year, but we will scale back our bullish forecast for the greenback should we see a break and a close below the 50-Day SMA (9,939).

The greenback weakened across the board, led by a 0. 62 advance in the Euro, while the Australian dollar is struggling to hold its ground ahead of the Reserve Bank of Australia interest rate decision as the central bank is widely expected to show a greater willingness to lower the benchmark interest rate further. Although market participants see the RBA keeping the cash rate at 3.25%, central bank Governor Glenn Stevens may hint at another rate cut during the first-half of 2013 in an effort to shield the $1T economy from the slowdown in global trade. As China – Australia’s largest trading partner – remains at risk for a ‘hard landing,’ we should see the RBA continue to embark on its easing cycle over the coming months, and the weakening outlook for interest rate expectations is likely to produce a more meaningful decline in the exchange rate as the AUDUSD maintains the downward trend from 2011. As the aussie-dollar carves out a lower top coming into December, we may see the pair give back the rebound from 1.0148, and the bearish sentiment surrounding the higher-yielding currency may gather pace in the year ahead as the region faces a slowing recovery.