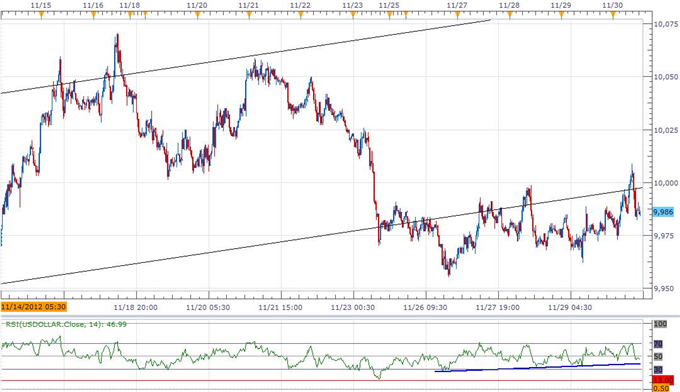 The Dow Jones-FXCM U.S. Dollar Index (Ticker: USDollar) remains 0.09 percent higher on the day after moving 97 percent of its average true range, and the upward trend in the 30-minute relative strength index may push the index higher going into the following week as it carves a short-term base ahead of December. Indeed, the flight to safety should continue to increase the appeal of the reserve currency as the ongoing turmoil in Europe and the slowdown in Asia drags on investor confidence, and the bullish trend looks poised to gather pace as market participants scale back their appetite for risk. However, as the U.S. Non-Farm Payrolls report highlights the biggest event risk for the following week, a slowdown in job growth may weaken the dollar ahead of the Fed’s December 12 meeting, and renewed bets for more quantitative easing may induce a larger correction to the downside as the central bank keeps the door open to expand its balance sheet further. Until then, we may see the dollar-yen continue to threaten the 83.00 figure, and the pair may continue to retrace the decline from earlier this year as the BoJ comes under increased pressure to further embark on its easing cycle.

Despite the headwinds facing the U.S. economy, the Fed appears to be bringing its easing cycle to an end as they anticipate a stronger recovery in 2013, and the central bank may adopt a more neutral tone in the coming months as the region gets on a more sustainable path. Beyond the Fiscal Cliff, the budding recovery in the housing market along with the resilience in private sector consumption should pave the way for faster growth, but we may see sticky price growth become a growing concern for the central bank as the more broad-based recovery heightens the risk for inflation. As the 61.8 percent Fibonacci retracement continues to hold up, we should see the upward trending channel from September take shape over the remainder of the year, and greenback certainly appears to be coiling up to make another run at the 10,100 figure as the FOMC softens its dovish tone for monetary policy.

Three of the four components weakened against the greenback, led by a 0.48 percent decline in the Japanese Yen, and the growing threat of a political shift in the world’s third-largest economy may continue to weaken the low-yielding currency as challenger Shinzo Abe encourages the Bank of Japan to adopt an unlimited asset purchase program and seeks to raise the central bank’s 1% inflation target to 3%. However, should the December 16 elections yield a multi-party coalition government, the lack of clear leadership may limit the scope of seeing the central bank succumb to public demands, and Governor Masaaki Shirakawa may steadily utilize the balance sheet in an effort to stem the risk for deflation. As negative price growth in Japan continues to foster positive real interest rates, the low-yielding environment across the world may generate greater interest for the JPY in 2013, and we need to see the relative strength index on the USDJPY come off of overbought territory to see a more meaningful move to the downside.