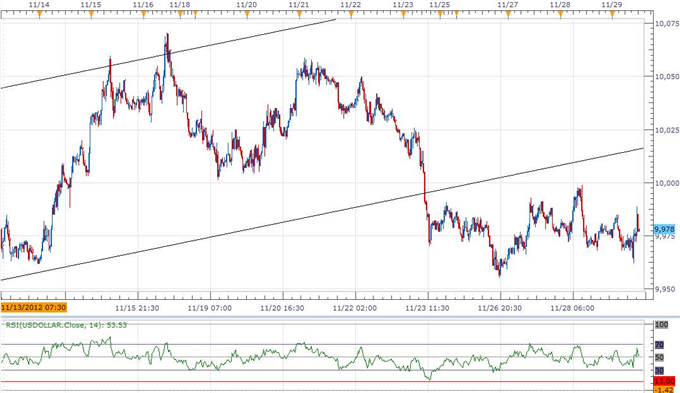 The Dow Jones-FXCM U.S. Dollar Index (Ticker: USDollar) is now little changed from the open after moving 65 percent of its average true range, and rebound may gather pace over the next 24-hours of trading as the 30-minute relative strength index bounces back ahead of oversold territory. As the developments coming out of the world’s largest economy encourages an improved outlook for growth, we’re seeing the Federal Reserve slowly changing its tune to reflect a more broad-based recovery, and the greenback appears to be building a short-term base ahead of the December 12 meeting amid the shift in central bank rhetoric. In turn, the USDOLLAR looks poised to trade back within the upward trending channel carried over from September, and the bullish sentiment surrounding the greenback may gather pace in the month ahead should the Fed carry its current policy into 2013. 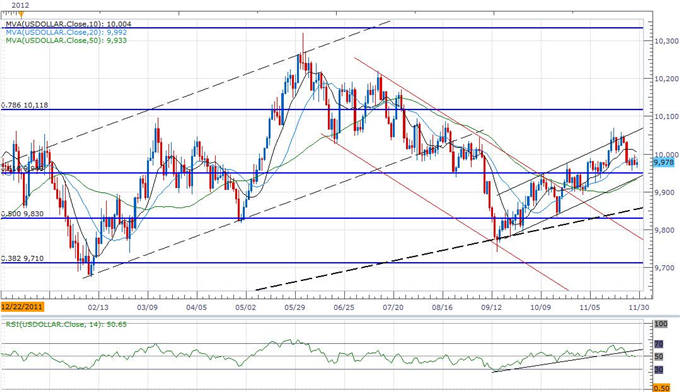 Indeed, New York Fed President William Dudley struck a rather neutral tone for monetary policy and said the FOMC will be ‘assessing the employment and inflation outlook in order to determine whether we should continue Treasury purchases into 2013,’ while Dallas Fed President Richard Fisher argued that the committee should ‘go back to a single mandate’ for preserving price stability as the central bank does not ‘have the necessary institutional tools’ to have a major influence on employment. As a growing number of Fed officials scale back their dovish tone for monetary policy, it seems as though the FOMC will let do away with Operation Twist as the non-standard measure is set to expire next month, and we may see the central bank endorse a wait-and-see approach throughout the following year. As the USDOLLAR continues to carve a higher low around the 61.8 percent Fibonacci retracement around 9,949, we should see the upward trend continue to take shape in December, and we will maintain our bullish forecast for as long as the index holds above the 50-Day SMA (9,933).

The greenback weakened against three of the four components, led by a 0.16 percent advance in the British Pound, while the Australian dollar bucked the trend and shed 0.42 percent from the open. Indeed, the high-yielding currency may face additional headwinds in the week ahead as the Reserve Bank of Australia continues to embark on its easing cycle, and the central bank rate decision on December 3 may fuel a sharp selloff in the exchange rate should Governor Glenn Stevens fuel bets for further rate cuts. According to Credit Suisse overnight index swaps, market participants are pricing a 73 percent chance for another 25bp rate cut next week, and the RBA may take additional steps in 2013 to shore up the $1T economy as the region faces a slowing recovery. As the AUDUSD struggles to push back above the 1.0500 figure, we will continue to play the downward trend from 2011, and the aussie-dollar looks poised to give back the rebound from 1.0148 as it carves out a lower high in November.