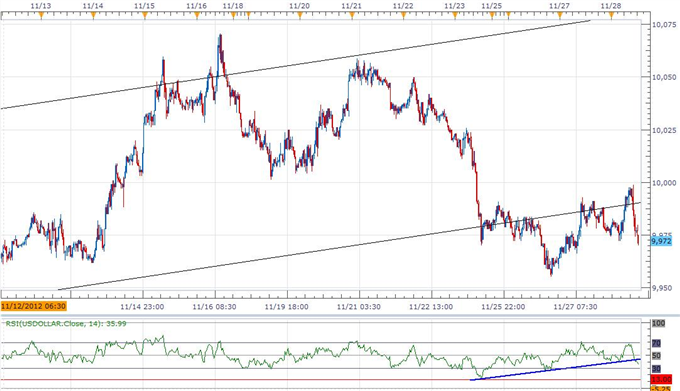 Although the Dow Jones-FXCM U.S. Dollar Index (Ticker: USDollar) remains 0.12 percent lower from the open after moving 76 percent of its average true range, the recent weakness in the reserve currency may be short-lived as the Federal Reserve faces limited scope to expand its balance sheet further. The bullish sentiment surrounding the greenback should get carried into the following month amid the shift in central bank rhetoric, and the Beige Book may pave the way for a higher high in the index as a growing number of Fed officials endorse an improved outlook for the world’s largest economy. However, as the 30-minute relative strength index struggles to preserves the upward trend carried over from the previous week, the pullback ahead of overbought territory may push the index back towards the 9,950 figure, and we may see the dollar consolidate going into the end of the week as central bank doves argue for additional monetary support. 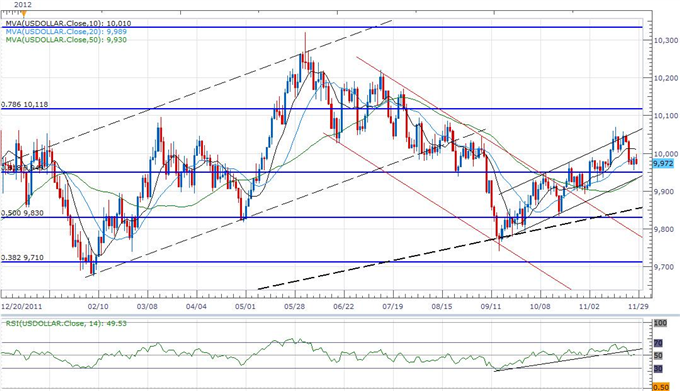 Indeed, Chicago Fed President Charles Evans said that the FOMC should preserve its zero-interest rate policy as long as unemployment hold above 6.5%, but scaled back his tolerance for a 3% rate of inflation as the argument made ‘many people anxious.’ As the economic recovery becomes more broad-based, we are likely to see sticky price growth become a growing concern for the central bank, and the committee may adopt a more neutral tone going into 2013 as growth and inflation picks up. In turn, we will maintain a bullish outlook as long as the USDOLLAR continues to trade above the 61.8 percent Fibonacci retracement around 9,949, and we may see the upward trending channel continue to take shape in December should the FOMC carry its current policy stance into 2013.

Two of the four components advanced against the greenback, led by a 0.32 percent advance in the Japanese Yen, and the low-yielding currency looks poised to appreciate further over the coming days as it remains oversold. As the relative strength index on the USDJPY falls back from a high of 77, the pullback from 82.82 should turn into a larger correction once the oscillator comes off of overbought territory, but the threat of a political shift in Japan may continue to dampen the appeal of the Yen as the opposition party looks to have a greater influence on the central bank. As Japanese policy makers look to revise the Bank of Japan’s (BoJ) mandate to reflect a 3 percent target for inflation, we may see the central bank struggle to retrain its independence over the coming months, and we may see growing bets for an unlimited asset purchase program as the board fails to stem the risk for deflation. In turn, we may see the USDJPY continue to retrace the decline from earlier this year, and the pair could be forming a new trend as the longer-term moving averages (100 and 200-Day) appear to be developing a positive slope.