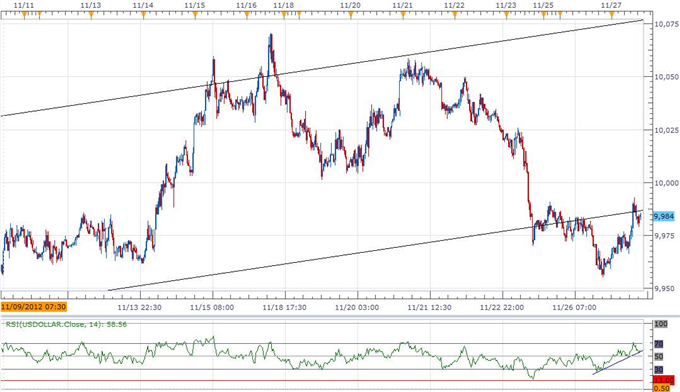 The Dow Jones-FXCM U.S. Dollar Index (Ticker: USDollar) is trading 0.12 percent higher from the open after moving 95 percent of its average true range, and the upward trend in the 30-minute relative strength index may carry the greenback higher over the next 24-hours of trading as the economic docket shows a more broad-based recovery in the U.S. economy. As a growing number of Fed officials soften their dovish tone for monetary policy, it seems as though the FOMC will preserve its current policy stance at the December 12 meeting, and the central bank may see limited scope to expand its balance sheet further as the recovery gradually gathers pace. However, as the oscillator falls back from overbought territory, the pullback in the RSI may trigger another run at the 9,950 figure, and we may see a small correction before the index makes a more meaningful move to the upside. 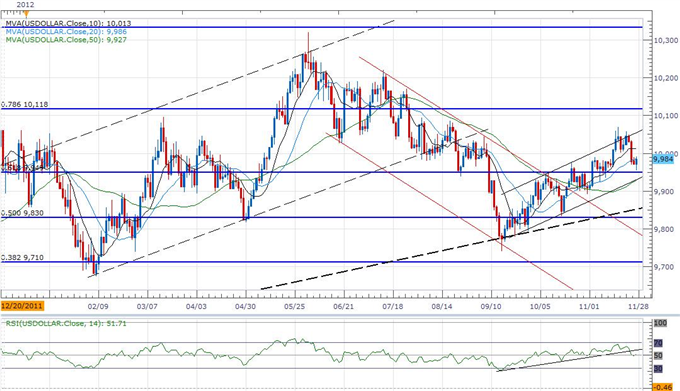 Although the FOMC keeps the door open to ease policy further, Dallas Fed President Richard Fisher argued that the committee should adopt a ‘limit’ on its asset purchases, and went onto say that the board should implement the new initiative ‘sooner than later’ as ‘QE infinity gets you into trouble.’ In light of the positive developments coming out of the world’s largest economy, the Fed’s Beige Book on tap for tomorrow may highlight an improved outlook for growth, and the district banks may talk down speculation for more easing amid the resilience in private sector consumption along with the recovery in the housing market. As the USDDOLLAR rebounds ahead of the 61.8 percent Fibonacci retracement around 9,949, the upward trending channel should continue to take shape in December, and we may see a more meaningful move towards the 10,100 figure should the Fed’s Beige Book sap bets for additional asset purchases.

The greenback advanced against three of the four components, led by a 29 percent decline in the Euro, while the British Pound bucked the trend as the Bank of England (BoE) endorses a neutral policy stance for the U.K. Although the BoE held a cautious outlook for the fourth-quarter, the central bank has certainly scaled back its dovish tone for monetary policy as inflation is now expected to hold above the 2 percent target over the next two-years. Indeed, the shift in the policy outlook reinforces our bullish forecast for the British Pound, and the sterling may continue to outperform against its major counterparts as the central bank appeals to be slowly moving away from its easing cycle. In turn, the GBPUSD looks poised to make another run at the 23.6 percent Fib from the 2009 low to high around 1.6190-1.6200, and the pair may ultimately threaten the downward trend from 2011 as the BoE turns its focus to price stability.