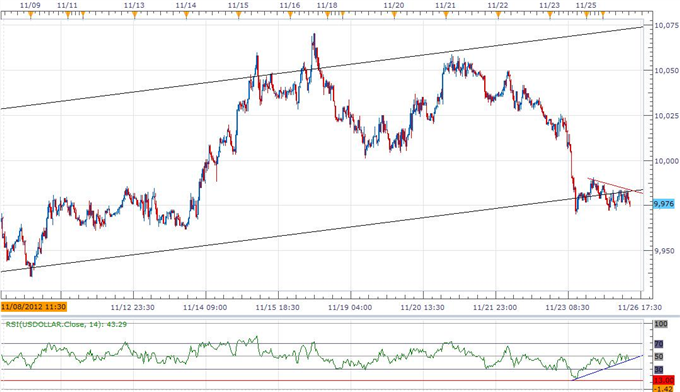 Forex: USD To Rebound Ahead Of Fed Beige Book- JPY Reversal Under Way

Although the Dow Jones-FXCM U.S. Dollar Index (Ticker: USDollar) remains little changed on the day, we’re seeing the greenback threaten the lower bounds of the upward trending channel carried over from the previous month, but the recent weakness in the reserve currency may be short-lived as there appears to be a bullish divergence in the 30-minute relative strength index. As the USDOLLAR appears to be carving a short-term bottom around the 9,975 figure, the series of higher lows should pave the way for further dollar strength, and we may see the ascending channel continue to take shape in December as the Federal Reserve turns increasingly optimistic towards the world’s largest economy. As the recovery becomes more broad-based, we should see Fed Chairman Ben Bernanke continue to soften his dovish tone for monetary policy, and the central bank head may endorse a more neutral tone going forward as the region gets on a more sustainable path. 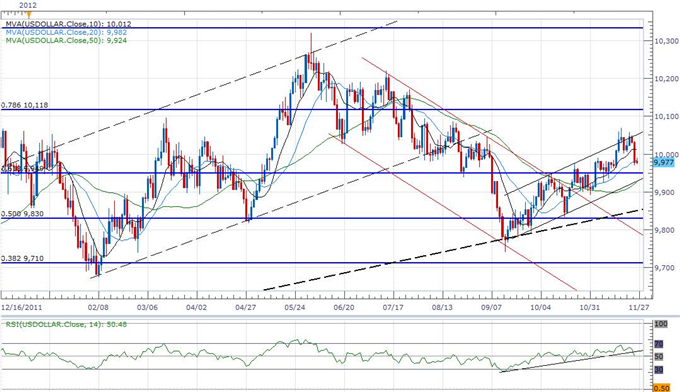 Indeed, the Fed’s Beige Book may highlight an improved outlook for growth amid the resilience in private sector consumption along with the picking in housing, and the fresh batch of central bank rhetoric may increase the appeal of the dollar as the district banks see a diminishing risk for a double-dip recession. In turn, we may see the USDOLLAR appreciate going into the December 12 meeting as market participants scale back bets for a further expansion in the central bank’s balance sheet. Although the fundamentals reinforce our bullish forecast for the greenback, we’re seeing the relative strength index breakout of the upward tend from back in September, and we may see the index fall back towards the 61.8 percent Fibonacci retracement around 9,949 as it searches for support. Nevertheless, the shift in the policy outlook should prop up the dollar going into 2013, and we are still looking for a run at the 10,100 figure as a growing number of Fed officials see limited scope for additional monetary support.

Three of the four components weakened against the greenback, led by a 0.06 percent decline in the Euro, while the Japanese Yen bucked the trend, with the USDJPY extended the pullback from 82.82. Indeed, the recent decline in the exchange rate may turn into a larger correction as the relative strength index comes off of overbought territory, but the low-yielding currency may face additional headwinds over the near-term as Japanese policy makers put increased pressure on the Bank of Japan (BoJ) to adopt a more aggressive approach in addressing the risks surrounding the region. The BoJ remains poised to carry its easing cycle into the following year as the central bank struggles to stem the risk for deflation, and the committee may show an increased willingness to undertake an unlimited asset-purchase program as board members Takehiro Sato and Takahide Kiuchi look to implement ‘powerful easing until it judges the 1 percent goal to be in sight.’ Despite the dovish remains from the BoJ, the threat of a political shift in Japan puts increased pressure on the central bank’s independence, and the Yen may continue to benefit from positive real interest rates as policy makers across the globe maintain a highly accommodative policy stance.