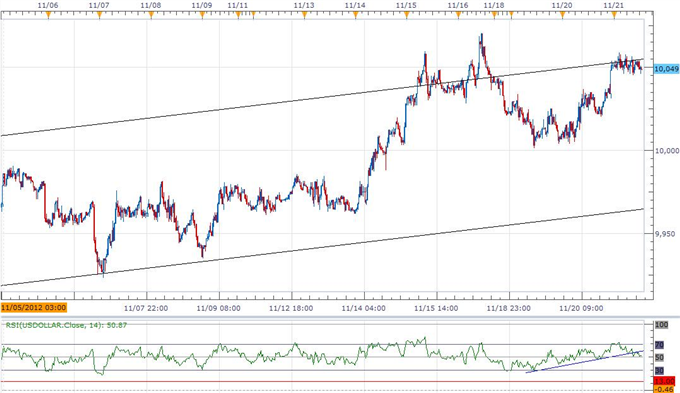 The Dow Jones-FXCM U.S. Dollar Index (Ticker: USDollar) is trading 0.27 percent higher on the day after moving 91 percent of its average true range, but we may see a short-term correction in the greenback as it trades back within the upward trending channel carried over from back in September. As the 30-minute relative strength index fails to maintain the bullish formation, the break in the oscillator may pull the index back towards the 10,000 figure, and we may see the major currencies face choppy price action over the remainder of the week as market liquidity thins.

Nevertheless, a short-term decline in the dollar may provide a buying opportunity during the final days of November as the Federal Reserve softens its dovish tone for monetary policy, and the bullish sentiment surrounding the reserve currency may gather momentum over the near to medium-term as the central bank raises its fundamental assessment fir the world’s largest economy. 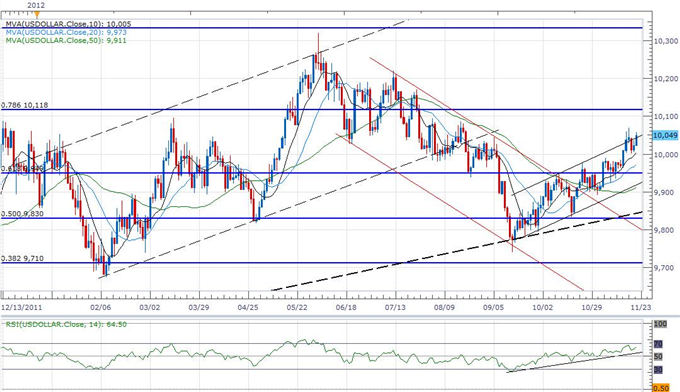 The improved outlook held by Fed Chairman Ben Bernanke may prop up the USDOLLAR ahead of the December 12 meeting as a growing number of central bank officials soften their dovish tone for monetary policy, and we may see the FOMC carry its current policy into the following year as the economic recovery gradually gathers pace. Indeed, the shift in central bank rhetoric reinforces our bullish forecast for the greenback, and we may see the pair make a run at the 0.78. percent Fibonacci retracement around 10,118 before we see a correction in the index.

As the relative strengthen index maintains the upward trend from September, the oscillator looks poised to reflect an overbought signal in the coming days, and we may see the index consolidate before making another major push to the upside. The 10,000 figure may provide psychological support over the coming days, but we should see the 61.8 percent Fib provide significant support as the ascending channel from earlier this year continues to take shape.

Two of the four components weakened against the greenback, led by a 0.92 percent decline in the Japanese Yen, while the Australian dollar shed 0.32 percent as heightening fears surrounding the world economy dampened risk-taking behavior. As the Reserve Bank of Australia (RBA) shows a greater willingness to lower the benchmark interest rat further, the bearish sentiment surrounding the higher-yielding currency should gather pace over the near-term, and the AUDUSD should resume the downward trend from 2011 as interest rate expectations remain tilted to the downside.

According to Credit-Suisse overnight index swaps, market participants are pricing a 64 percent chance for a 25bp rate cut at the December 3 meeting, but see borrowing costs falling by at least 50bp over the next 12-months as the central bank attempts to shield the $1T economy from the slowdown in global growth. As the AUDUSD struggles to make a meaningful move back above the 61.8 percent retracement from the 2011 high to low around 1.0430-40, the pair appears to be carving out a lower top in November, and we should see the exchange rate fall back towards the 50.0 percent Fib (1.0230-40) as the central bank RBA continues to embark on its easing cycle.