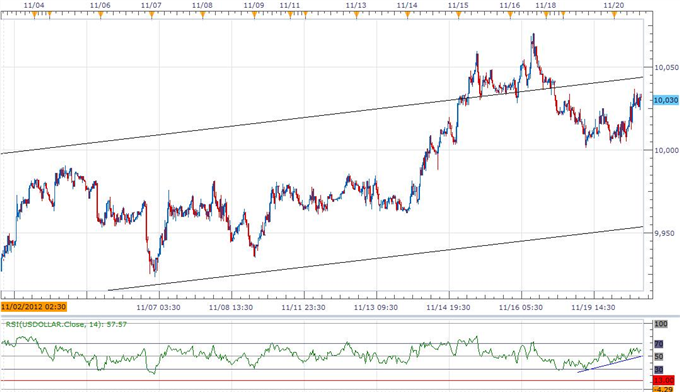 Forex: USD Outlook Propped Up By Less-Dovish Bernanke, 10,100 On Tap

The Dow Jones-FXCM U.S. Dollar Index (Ticker: USDollar) remains 0.18 percent higher from the open as Fed Chairman Ben Bernanke highlighted an improved outlook for the world’s largest economy, and the greenback may continue to track higher ahead of the Thanksgiving holiday as the bullish trend persistently take shape. Although we’re seeing the 300minute relative strength index approach overbought territory, the positive slope in the oscillator could push the index back above the 10,050 figure as the central bank head softens his dovish tone for monetary policy.

The fresh commentary from Chairman Bernanke suggests that the FOMC will extend its wait-and-see approach into the following year, and easing bets for additional monetary support should prop up the dollar over the near to medium-term as market participants weigh the prospects for future policy. Although Mr. Bernanke wants to see stronger recovery before starting to normalize monetary policy, it seems as though the committee will start to discuss a tentative strategy in the following year, and the shift in the central bank rhetoric supports our bullish outlook for the greenback as the region gets on a more sustainable path. 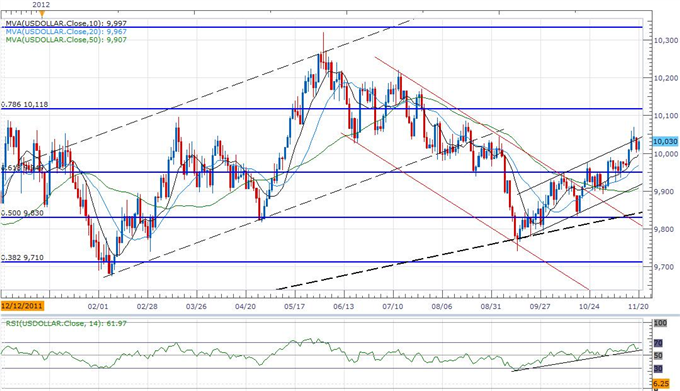 Richmond Fed President Jeffery Lacker, the lone dissenter on the FOMC, warned against the highly accommodative policy stance and said that the task of normalizing monetary policy becomes riskier as the central bank continues to expand its balance sheet. President Lacker argued whether the non-standard measures would continue to prop up the economy ‘without raising expected inflation over some horizon,’ and went onto say that ‘the Fed's credibility is not so unassailable that inflation expectations can be dialed up for a time and then easily dialed back to price stability.’ Furthermore, Mr. Lacker also voiced his opposition for tying monetary policy to specific fundamental goals as they ‘can easily lead you astray,’ and we may see the 2013 FOMC strike a more neutral tone as the economic recovery becomes more broad-based.

As the relative strength index continues falls back ahead of overbought, we may see the USDOLLAR consolidate going into the holiday trading, but we will maintain our bullish forecast for the greenback as the oscillator preserves the upward trend carried over from back in September. In turn, we are still looking for a run at the 78.6 percent Fibonacci retracement around 10,118, and the bullish sentiment surrounding the reserve currency may gather pace going into the end of the year should the FOMC endorse a more neutral tone at the December 12 meeting.

The greenback rallied against three of the four components, led by a 0.38 percent decline in the Japanese Yen, and the low-yielding currency may face additional headwinds ahead of the December elections amid the growing threat for a political shift in the world’s third-largest economy. However, after maintain its current policy in November, Bank of Japan (BoJ) Governor Masaaki Shirakawa argued against the 3 percent inflation target sought by opposition leader Shinzo Abe and said the proposal is an unrealistic goal as the central bank struggles to preserve its independence. As the region faces a growing risk of slipping back into recession, the government is likely to put additional pressure on the BoJ to embark on an unlimited asset purchase program, and we should see the central bank carry its easing cycle into the following year as it struggles to stem the risk for deflation.

Indeed, the USDJPY looks poised for a short-term correction as the relative strength index pushes into overbought territory, and we may have an opportunity to catch the downside once the oscillator slips back below 70. As the USDJPY struggles to hold above the 61.8 percent Fib from the 2011 high to low around 81.70, the pair could be carving out a near-term top ahead of December, and former resistance around the 50.0 percent retracement (80.50) may act as new support as the pair retraces the selloff from the previous year.