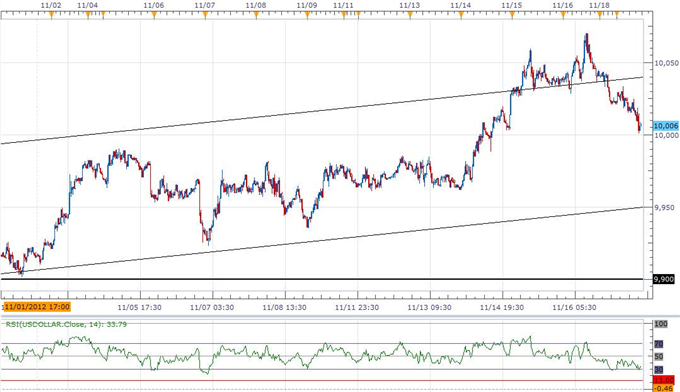 The Dow Jones-FXCM U.S. Dollar Index (Ticker: USDollar) is 0.25 percent lower from the open after trading 72 percent of its average true range, and the greenback may trade heavy throughout the North American trade as hopes surrounding the EU meeting fuels risk-taking behavior. However, the index looks poised for a short-term rebound as the 30-minute relative strength index threatens oversold territory, and we may see the dollar build short-term base going into the final days of November as the greenback holds above the 10,000 figure. As the index continues to carve out a series of higher highs paired with higher lows, the bullish formation from earlier this month should continue to take shape over the near-term, and the bullish sentiment surrounding the reserve currency may gather pace in 2013 should the Federal Reserve carry a wait-and-see approach into the following year. 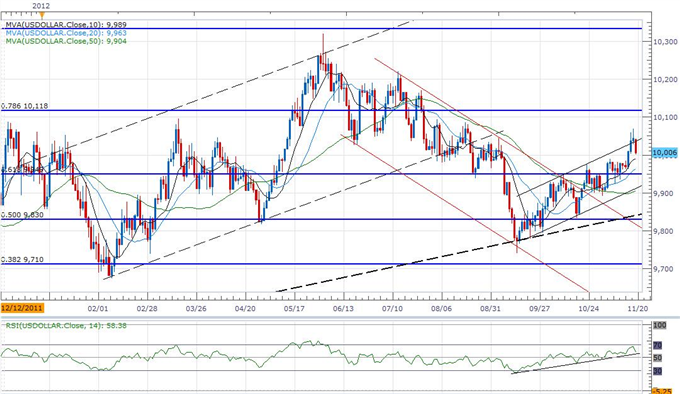 Atlanta Fed President Dennis Lockhart struck a rather dovish tone for the world’s largest economy and said that the ‘aggressive use of balance sheet monetary tools will be appropriate and justified by economic conditions for some time’ amid the ongoing weakness in the labor market, and supported ‘a threshold number for unemployment’ as the central bank aims to encourage a stronger recovery. However, as a growing number of central bank officials see consumer price growth holding close to the 2 percent target, the heightening threat for long-term inflation may encourage the Fed to soften its dovish tone for monetary policy, and we may see the FOMC carry its current policy into the following year as the rebound in economic activity gradually gathers pace. As the relative strength index on the daily chart maintains the upward trend from September, we are still looking for a run at the 78.6 percent Fibonacci retracement around 10,118, and we should see the upward trend in the index continue to take shape as long as price action holds above the 61.8 percent Fib around 9,949.

Tall four components advanced against the greenback, led by a 0.64 percent rally in the Australian dollar, but the high-yielding currency may struggle to hold its ground over the next 24-hours of trading as the Reserve Bank of Australia (RBA) keeps the door open to expand monetary policy further. As consumer price expectations slip to a three-year low, the slowdown in growth and inflation should encourage the central bank to embark on its easing cycle over the near to medium-term, and the RBA Minutes may fuel speculation for lower borrowing costs as Governor Glenn Stevens tries to shield the $1T economy from the slowdown in global growth. According to Credit Suisse overnight index swaps, market participants are still looking for 50bp worth of rate cuts over the next 12-months, and we will maintain our bearish forecast for the AUD/USD as the pair preserves the downward trend carried over from the previous year. As the aussie-dollar remains in a consolidation phase, we will be keeping a close eye on the shorter-term moving averages (10, 20 and 50 day), and we will need to see the faster-moving indicators push below the 100 and 200-Day SMA’s to see a more meaningful move back towards parity.