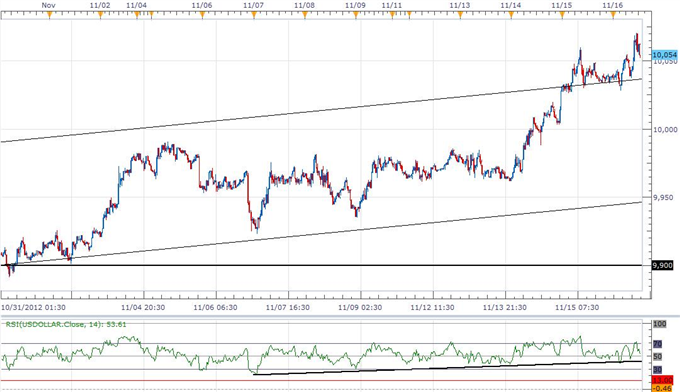 The Dow Jones-FXCM U.S. Dollar Index (Ticker: USDollar) is trading 0.18 percent higher on the day after moving 105 percent of its average true range, and the bullish sentiment surrounding the greenback may get carried into the following week as a growing number of Fed officials speak out against tying monetary policy to specific fundamental goals. As former trendline resistance now acts as support, the dollar should continue to track higher next week, but the holiday weekend in the U.S. may produce choppy price action across the major currencies as market participation thins ahead of Thanksgiving. Nevertheless, the upward trend in the 30-minute relative strength index certainty points to further U.S. dollar strength over the near-term, but we may see the reserve currency consolidate in the days ahead as Fed Chairman Ben Bernanke is scheduled to speak on the economy next week. 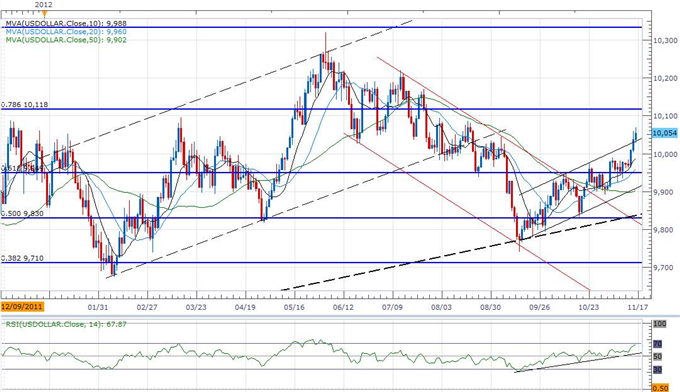 In light of the ongoing slack in the U.S. economy, Philadelphia Fed President Charles Plosser argued that maybe ‘the factors contributing to mediocre economic performance cannot be offset by monetary policy,’ and warned that the unprecedented steps taken by the FOMC ‘carry long-term risks for our economies and for central banks’ as the committee pushes deeper into uncharted territory. Although the fundamental outlook remains clouded with high uncertainty, it seems as though a growing number of Fed policy makers are seeing limited scope to conduct additional asset purchases, and we anticipate the central bank to carry its wait-and-see approach into the following year as the economic recovery gradually gathers pace. In turn, we should see the USDOLLAR continue to make it way towards the 78.6 percent Fibonacci retracement around 10,118, but we may see a short-term pullback in the index as the relative strength index threatens overbought territory.

The greenback rallied against three of the four components, led by a 0.45 percent decline in the Euro, while the Japanese Yen shed another 0.24 percent amid the growing threat for a political shift in the world’s third-largest economy. Although the December elections has dampened the appeal of the low-yielding currency, we’re expecting to see the Bank of Japan maintain its current policy at the meeting on tap for the following week, but the central bank may continue to put its credibility and independence on the line as Japanese lawmakers call for an unlimited asset purchase program. As the BoJ struggles to achieve the 1 percent target for inflation, the central bank is widely expected to carry its easing cycle into the following year, put positive real interest rates in Japan may continue to shore up the Yen amid the low-yielding environment across the global landscape. As the relative strength index on the USDJPY threatens overbought territory, the pair looks poised for a short-term correction, but the headline driven market may continue to push the exchange rate higher as the fundamental outlook for the world economy remains clouded with high uncertainty.