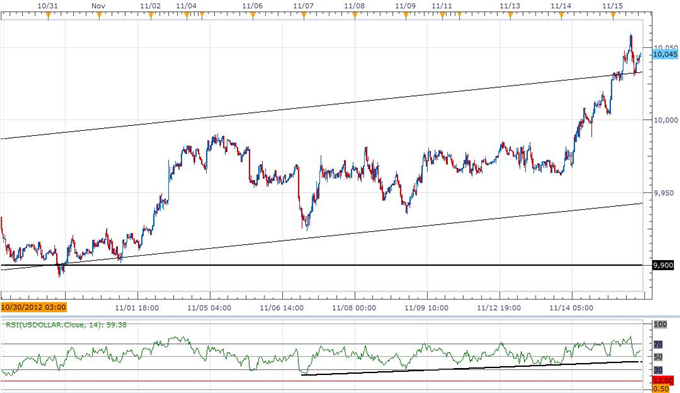 The Dow Jones-FXCM U.S. Dollar Index (Ticker: USDollar) remains 0.23 percent higher from the open after moving 138 percent of its average true range, and the greenback looks poised to appreciate further over the next 24-hours of trading as the upward trend in the 30-minute relative strength index continues to take shape. Should the oscillator preserve the bullish formation from earlier this month, we may see former trendline resistance act as new support, and the short-term rally look poised to get carried into the following week as the flight to safety gathers pace. Nevertheless, headlines coming out of Europe may fuel a rebound in risk sentiment as the EU increases its effort to avert a Greek default, but the deepening recession in the euro-area is likely to become a greater concern for global investors as the debt crisis continues to dampen the fundamental outlook for the region. 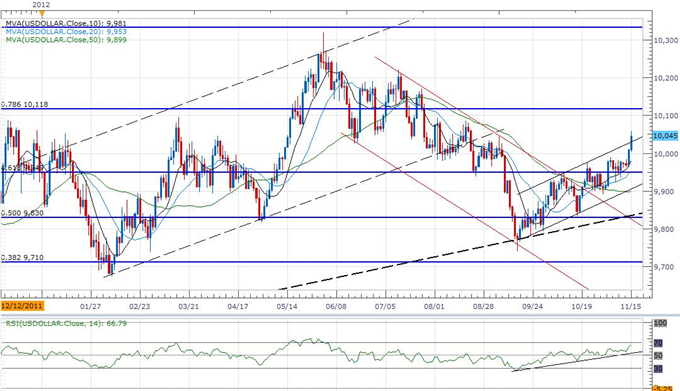 Although the FOMC Minutes highlighted a greater willingness to pursue a further expansion in quantitative easing, Fed hawks are likely to present dissenting arguments for additional monetary support, and we may see a growing rift within the central bank as the world’s largest economy gets on a more sustainable path. In turn, we may see a growing number of Fed officials strike a neutral tone for monetary policy, and the dollar should continue to trap higher over the near-term as the central bank looks to carry its wait-and-see approach into the following year. As the relative strength index climbs towards overbought territory, we may see a small pullback in the index, but we are now looking at move towards the 0.786 percent Fibonacci retracement around 10,118 as the oscillator maintains the upward trend from back in September.

Two of the four components weakened against the U.S. dollar, led by a 1.08 percent decline in the Japanese Yen, while the Australian dollar shed another 0.64 percent as market participants scaled back their appetite for risk. Indeed, the high-yielding currency remains paired for further weakness as inflation expectations slip in the $1T economy slip to a three-year low, and the AUDUSD looks poised to give back the rebound from the previous month as the Reserve Bank of Australia (RBA) maintains a dovish tone for monetary policy. According to Credit Suisse overnight index swaps, market participants now see the RBA lowering the benchmark interest rate by nearly 75bp over the next 12-months, and the downturn in interest rate expectations should dampen the appeal of the aussie as investors weigh the outlook for monetary policy.