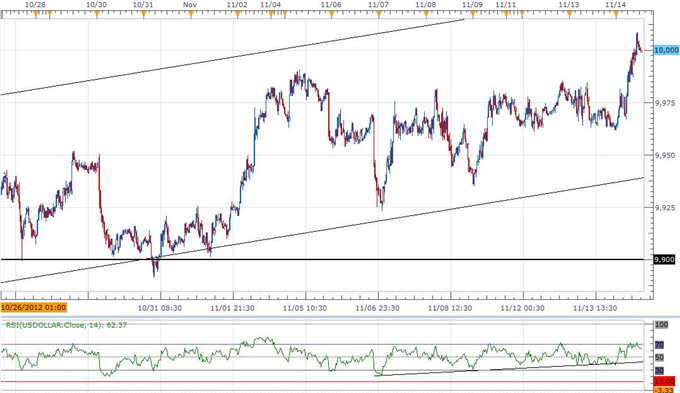 Forex: USDOLLAR Clears 10,000 Ahead Of FOMC- JPY Hit By Uncertainty

The Dow Jones-FXCM U.S. Dollar Index (Ticker: USDollar) is 0.32 percent higher from the open after moving 121 percent of its average true range, and we will need to see the Fed soften its dovish tone for monetary policy to see the greenback track higher over the remainder of the week. Indeed, the technical outlook points to a short-term correction for the dollar as the 30-minute relative strength index falls back from overbought territory, but a shift in central bank rhetoric may spark fresh monthly highs in the index as market participants weigh the prospects for future policy. As the USDOLLAR continues to carve out a series of higher highs paired with higher lows, we will preserve our bullish forecast going into the end of November, and the FOMC Minutes may heighten the appeal of the reserve currency as the central bank highlights the ongoing improvements in the world’s largest economy. 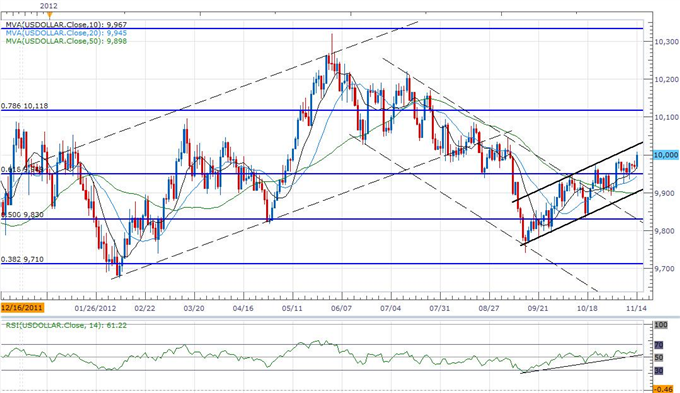 As the FOMC keeps the door open to expand its balance sheet further, a dovish tone for monetary policy would drag on the dollar, and there’s growing speculation that the central bank will expand its open-ended asset purchase program beyond the $40B monthly limit as Operation Twist is scheduled to expire at the end of the year. However, as the ballooning balance sheet raises the long-term threat for inflation, and we may see a growing number of Fed officials argue against additional monetary easing as the economy gets on a more sustainable path. As the USDOLLAR finally breaks above the 10,000 figure, we would like to see a close to the upside to see the bullish sentiment get carried into the following week, but the index may face a short-term pullback as it comes up against trendline resistance. Indeed, we will be watching the relative strength index for confirmation as it preserves the upward trend from the end of September, but the oscillator may foreshadow a short-term correction in the index as it approaches overbought territory.

The greenback rallied against three of the four components, led by a 0.96 percent decline in the Japanese Yen, and the low-yielding currency may weaken further over the near-term as policy makers put increased pressures on the Bank of Japan (BoJ) to address the risks surrounding the world’s second-largest economy. Indeed, the risk for a political shift in Japan has dampened the appeal of the Yen as a growing number of Japanese officials put pressure on the BoJ to embark on an unlimited asset purchasing program, and we should see the central bank continue to embark on its easing cycle in 2013 as it fails to achieve the 1 percent target for inflation. However, as positive real interest rates props up the appeal of the low-yielding currency, the recent weakness in the Yen could be short-lived, and currency traders may favor holding the low-yielding currency going into the following year as the major central banks across the global keep interest rates at or close to record-lows.