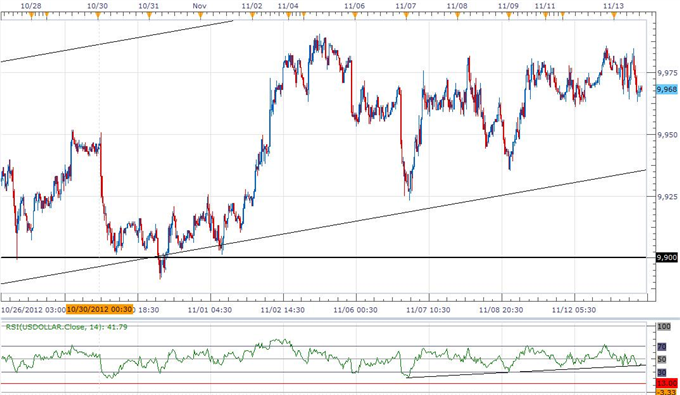 The Dow Jones-FXCM U.S. Dollar Index (Ticker: USDollar) remains little changed from the open after moving 60 percent of its average true range, and the index looks poised to maintain the range-bound price action as forex traders weigh the outlook for monetary policy. As the dollar continues to carve out a series of higher lows, the fresh batch of central bank rhetoric may serve as the fundamental catalyst to spark fresh monthly highs in the index, and we should see the upward trend from the previous month continue to take shape as the world’s largest economy gets on a more sustainable path. We will continue to look for another run at the 10,000 figure as long as the 30-minute relative strength index preserves the upward trend carried over from the previous week, and the bullish sentiment surrounding the reserve currency may gather pace over the remainder of the year should the FOMC carry a wait-and-see approach into the following year. 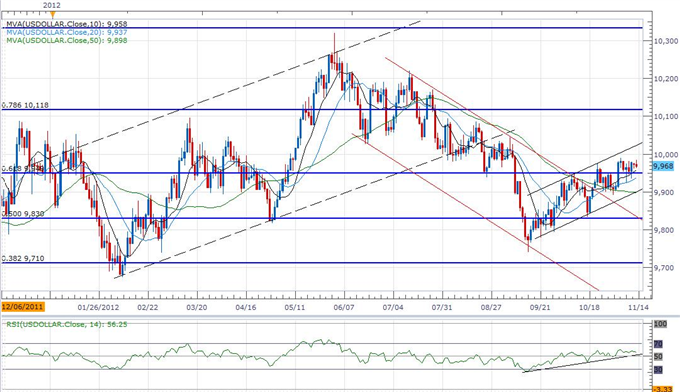 In light of the highly accommodative policy stance held around the world, St. Louis Fed President James Bullard struck a rather hawkish tone and argued that ‘current U.S. policy stance may be substantially easier than the policy stance recommended by commonly-used monetary policy feedback rules’ as it raises the long-term risk for inflation. At the same time, Mr. Bullard said extending Operation Twist is ‘unlikely’ amid the ballooning balance sheet, and went onto say that the headwinds facing the world’s largest economy has ‘been lessening gradually over time’ as the recovery slowly becomes more broad-based. Nevertheless, the technical outlook favors further dollar advances as the index persistently closes above the 61.8 percent Fibonacci retracement (9,949) in November, but we will keep a close eye on the relative strength index as it struggles to push above the 60 figure. Should the oscillator fail to find trendline support, a bearish move could ultimately lead the USDOLLAR to threaten the upward trend going into the end of the month.

The greenback weakened against three of the four components, led by a 0.13 percent advanced in the Japanese Yen, while the Australian dollar climbed 0.09 percent amid the rebound in risk sentiment. However, as the economic calendar is expected to show wage costs in the $1T economy expanding for the second straight quarter, the data may fuel bets for further rate cuts from the Reserve Bank of Australia (RBA), and we may see the AUDUSD struggle to hold above the 1.0400 figure as the central bank continues to strike a dovish tone for monetary policy. According to Credit Suisse overnight index swaps, market participants still see another 50bp worth of rate cuts in the next 12-months, and we may see the bearish trend in the exchange rate continue to pan out as interest rate expectations remain tilted to the downside.