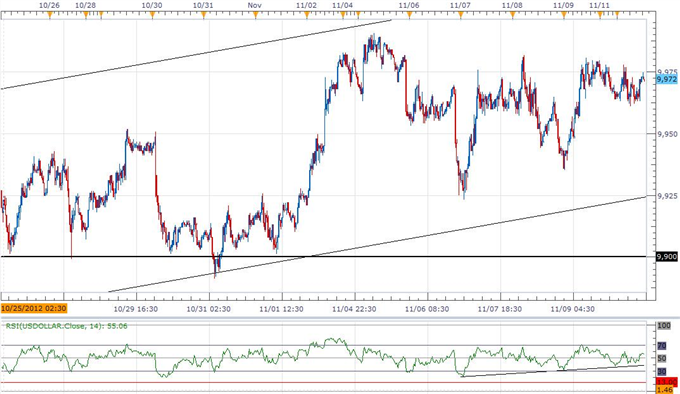 Although the Dow Jones-FXCM U.S. Dollar Index (Ticker: USDollar) remains 0.09 percent lower from the open, the series of higher lows should pave the way for higher highs, and we are still looking for another run at the 10,000 figure as the ascending channel carried over from October continues to take shape. At the same time, the upward trend in the 30-minute relative strength index continues to reinforce our bullish outlook for the greenback, but the headlines coming out of the EU meeting may dampen the appeal of the reserve currency as European policy makers increase their effort to restore investor confidence. As the economic docket for the U.S. remains fairly light over the next 24-hours of trading, risk trends should drive price action across the forex market, but the fresh batch of central bank rhetoric on tap for later this week may keep the USDOLLAR within a tight range as market participants weigh the outlook for monetary policy. 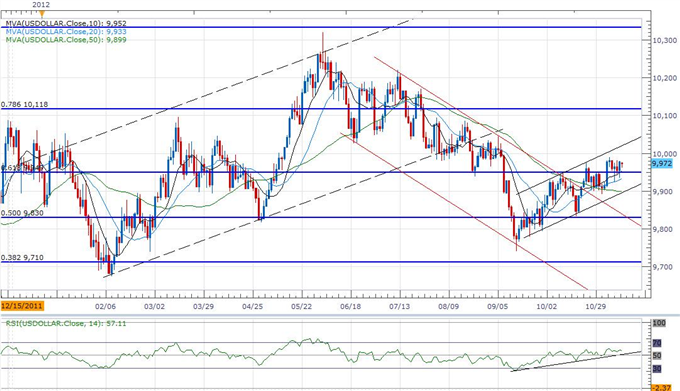 Indeed, the FOMC Minutes highlight the biggest event risk for the greenback, and we may see the central bank strike an improved outlook for the region as the world’s largest economy gets on a more sustainable path. As a result, we may see a growing number of Fed officials scale back their dovish tone for monetary policy, and the committee may continue to rely on its transmission mechanisms to encourage private sector activity as the gradual recovery dampens the central bank’s scope to expand its balance sheet further. In turn, the policy statement may serve as the fundamental catalyst to spark a run at the 10,000 figure, and the bullish pattern in the 10, 20 and 50 day moving averages certainly points to a higher dollar as the indicators start to diverge from one another. At the same time, we will need to keep a close eye on the relative strength index as it approaches overbought territory, but we should see the index track higher in the coming days as the oscillator preserves the upward trending from back in September.

Two of the four components advanced against the greenback, led by a 0.39 percent rally in the Australian dollar, while the Japanese Yen gained 0.04 percent even as the 3Q GDP raised the threat for a double-dip recession in the world’s third-largest economy. As growth and inflation remains subdued, we anticipate the Bank of Japan to carry its easing cycle into the following year, but a further expansion in the central bank’s balance sheet may do little to dampen the appeal of the low-yielding currency as the Yen continues to benefit from positive real interest rates in Japan. As the relative strength index on the USDJPY continues to fall back from overbought territory, the pullback from the monthly high (80.66) should continue to pan out over the near-term, and we may see the pair work its way back towards the 78.00 figure as the dollar-yen continues to search for support.