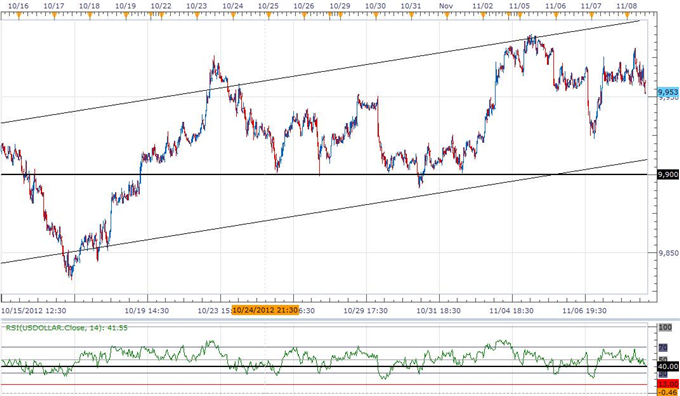 Although the Dow Jones-FXCM U.S. Dollar Index (Ticker: USDollar) is 0.11 percent lower from the open , the shift in trader sentiment should push the greenback higher over the next 24-hours of trading as it benefits from safe-haven flows. As the economic calendar remains fairly light for the remainder of the week, risk trends are likely to dictate price action across the major exchange rates, and negative headlines surrounding the global landscape may continue to sap risk-taking behavior as the fundamental outlook for the world economy remains clouded with high uncertainty. As the 30-minute relative strength index consolidates around the 40 figure, the index appears to be building a short-term base for another run at the 10,000 figure, and the bullish momentum surrounding the dollar may carry into the following week as investor confidence wanes. 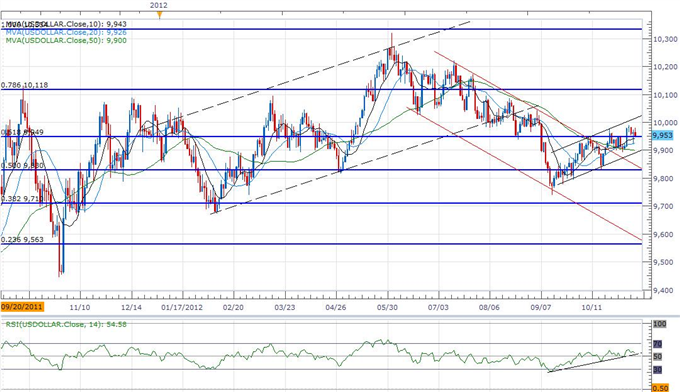 Beyond the European debt crisis, the political and economic shift in China may spur greater uncertainty for the global economy, and the flight to safety may gather pace over the coming days as the world’s second-largest economy remains at risk for a ‘hard landing.’ As China moves from its export-driven market to a more consumer-based economy, the new initiatives may complicate the government’s role in encouraging private-sector activity, and signs of a further slowdown in global growth will continue to prop up the dollar as forex traders scale back their appetite for risk. Indeed, the upward trend in the relative strength index continues to reinforce our bullish bias for the dollar, and we should see the ascending channel persistently take shape over the near to medium-term as risk aversion takes hold of the financial markets.

The greenback weakened against two of the four components, led by a 0.46 percent rally in the Japanese Yen, which was followed by a 0.23 percent advance in the Australian dollar. Indeed, the better-than-expected employment report coming out of the $1T economy propped up the high-yielding currency, with the AUDUSD trading back above the 1.0400 figure, but the policy outlook continues to strike a bearish outlook for the aussie as market participants see the Reserve Bank of Australia (RBA) carrying its easing cycle into the following year. According to Credit Suisse overnight index swaps, investors still see RBA cutting the benchmark interest rate by at least 50bp over the next 12-months, and we should see the AUDUSD continue to give back the rebound from earlier this year as it maintains the downward trend from 2011.