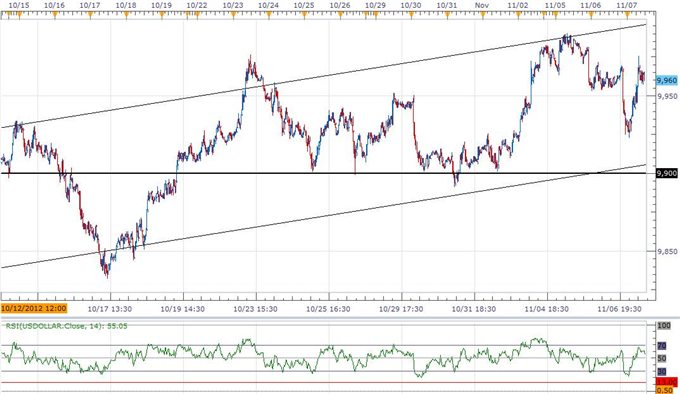 Although the Dow Jones-FXCM U.S. Dollar Index (Ticker: USDollar) remains relatively flat from the open, the shift in risk-taking behavior should prop up the reserve currency over the remainder of the week as it benefits from safe-haven flows. In turn, we are still looking for another run at the 10,000 figure as the index preserves the upward trending channel from earlier this month, but the dollar may consolidate over the next 24-hours of trading as the 30-minute relative strength index falls back from overbought territory. Nevertheless, we will maintain our bullish forecast for the USDOLLAR as the developments coming out of the world’s largest economy casts an improved outlook for growth, and the Fed may start changing its tune for monetary policy as the recovery gradually gathers pace. 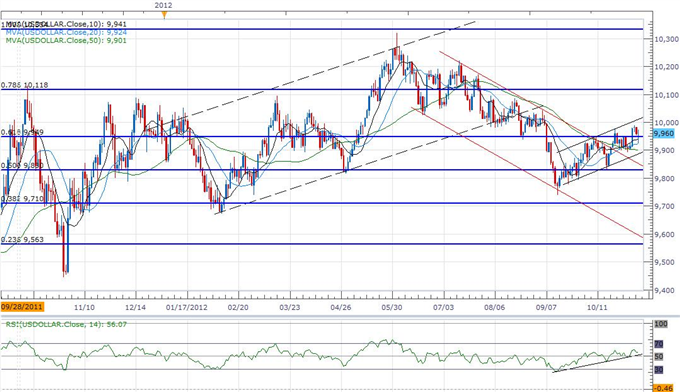 Indeed, Fed doves continued to talk up speculation for additional monetary support as policy makers look for a larger reduction in unemployment, but the very accommodative policy stance may come under increased scrutiny as the economy gets on a more sustainable path. As Atlanta Fed President Dennis Lockhart highlights the risk of tying monetary policy to the jobless rate, the FOMC certainly faces limited scope to provide additional monetary support, and we should see the central bank maintain its wait-and-see approach throughout the remainder of the year as the ongoing expansion in the Fed’s balance sheet raises the long-term risk for inflation. As the relative strength index on the daily chart preserves the upward trend from the previous month, we should see the index continue to track within the ascending channel, and the dollar looks poised to retrace the decline from earlier this year as a growing number of Fed officials soften their dovish tone for monetary policy.

Three of the four components weakened against the greenback, led by a 0.38 percent decline in the Euro, while the Japanese Yen bucked the trend as the low-yielding currency gained 0.65 percent against its U.S. counterpart. As the persistent strength in the Yen dampens the outlook for the world’s third-largest economy, Bank of Japan (BoJ) Governor Masaaki Shirakawa highlighted a weakening outlook for the region, and we should see the central bank continue to embark on its easing cycle as it struggles to achieve the 1 percent target for inflation. In turn, we should see the BoJ further expand its balance sheet over the coming months, but the heightening threat of deflation may put increased pressure on the central bank to intervene in the currency market as Japanese policy makers continue to look for an export-led recovery.